Also known by young locals over the years as Seagull Island, Crab Island, Heartbreak Rock or even Rat Island, the now-you-see-it-now-you-don’t seaweed encrusted rock off Torre Abbey Sands does have an official name.

This is Harbreck Rock, a reef of Permian breccia which can be seen at low tide. It lends its name to Harbreck Heights, the apartment block on Warren Road which overlooks the Sands. 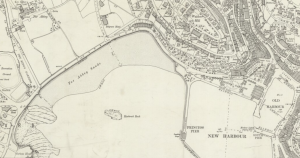 The origin of the name isn’t clear. Early maps note its existence but usually don’t name it. When they occasionally do it has also been called Harbrick Rock. By the early twentieth century, however, it is identified by the Ordnance Survey as Harbreck- see the 1904 map below.

Etymology is an imprecise science, so we can only make an educated guess at the origin of Harbreck. However, the Old English ‘heah’ means high and ‘breck’ is a stretch of rough undulating ground. On the other hand, ‘haar’ is a cold wet sea fog. If, as it seems, the Rock has an Old English name this dates the naming to at least the time when the Abbey was operating. The other regular emergence from the waves is, of course, the medieval harbour at Livermead.

Even today the Rock can be a danger to unwary sailors. And in 1930 the historian Ellis confirms that the Rock was a menace – he records that in the mid-1850s the emigrant ship Margaret twice, “narrowly escaped shipwreck on the Harbreck Rocks.”

There may also be a connection to Liverpool – an affluent Victorian resident of Torre also owned Harbreck House in Fazakerley. Gores Directory for 1853 records that the cotton and colonial produce broker Jaques Myers lived in Liverpool’s now-lost Harbreck House. In 1881 Helen, Jacques Myer’s widow, lived at ‘The Firs’ in Tormoham with the help of 10 servants, which “coincidentally overlooks Harbreck Rock in Torbay”. Was that really a coincidence: did Jaques name his house after visiting the Bay; did Jaques name the Rock; or is there another possibility? 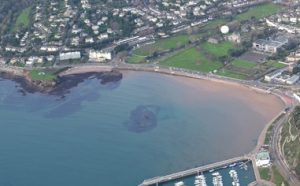 And there’s more hidden Torquay out there. Nearby, after extreme storms, the sand can be washed away to expose the forest bed beneath – a “stiff, dark grey clay containing logs, roots and branches”. These are the remains of the marshy woodland which grew around 5,000-10,000 years ago when the sea level was lower.