Hydropathics – or Hydros – were institutions created to practice hydropathy, a cure-all which played an important part in Torquay’s development as a tourist resort.

To the tourism industry’s slight embarrassment, Torquay’s genesis came from the decision to cater for the needs of the sick and dying. ‘The Guide to the Watering Places of South Devon’ (1817) states that the town “was built to accommodate invalids”; while Octavian Blewitt’s ‘Panorama of Torquay’ (1832) confirms that “houses were erected for the accommodation of the invalids”.

By 1840 the illness industry was well entrenched with Dr AB Granville writing, “The Frying Pan along the Strand is filled with respirator-bearing people who look like muzzled ghosts, and ugly enough to frighten the younger people to death”. Torquay was “the south west asylum for diseased lungs”, with the hotels “filled with spitting pots and echoing to the sounds of cavernous coughs, outside the only sound to be heard was the frequent tolling of the funeral bell”. 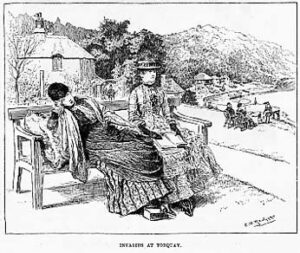 The primary cause of such sickness was consumption, a term for the wasting away of the body particularly from pulmonary tuberculosis. The town eagerly promoted itself as a place to be cured and in 1830 Dr Clark praised Torquay, claiming that the town “possesses all the advantages of the South-Western climate in the highest degree” for the treatment of consumption. The following year the Irish surgeon James Johnson wrote a very successful book, ‘Change of Air, or the Diary of a Philosopher in Pursuit of Health and Recreation’, which recommended visiting health-giving resorts.

By 1850, 90% of travelling British invalids suffered from consumption and up until the 1870s they dominated the peripatetic ailing community. Initially TB was not even seen negatively as it was understood not to be infectious while the ailing generated an all-year-round income for many hotels. Indeed, it was associated with poets and artists and known as ‘the romantic disease’. Visitors to Torquay who suffered include Percy Bysshe Shelley, Robert Louis Stevenson, Elizabeth Barrett Browning and Charles Kingsley.

Offering cures, or at least some relief, were a variety of competing systems. Among these was Hydropathy, the therapeutic use of water. This covers a broad range of approaches and methods, such as temperature and pressure to stimulate blood circulation and to treat the symptoms of a range of diseases.

Hydropathy’s creator, the Silesian ‘peasant” Vincent Priessnitz, developed the treatment by experimenting on livestock and his willing neighbours; and in 1826 he established Griifenberg to offer his water cure. People visited from all over Europe, one of whom was Britain’s Captain Claridge who published a glowing account in 1842. Hydropathy then came to Britain.

Hydropathic institutions began to be built, initially in spa towns where there were already the fashionable pastimes of promenading, bathing, and the quaffing of foul-tasting mineral waters. It was inevitable that the hydropathic model would transfer to the new holiday resorts like Torquay which were already in the health business.

Many in Torquay’s medical profession were, however, unconvinced by Hydropathy’s cure-all claims and classed them alongside other popular pseudo-scientific offerings such as homeopathy, mesmerism, phrenology, and the sale of patent medicines. Nevertheless, there was money to be made and so from the 1840s Hydropathics were being established across Britain

Initially, these were small institutions but by the later nineteenth century they had evolved into substantial hotels with baths and recreation rooms under the supervision of qualified medical practitioners.

At their peak there were over fifty hydropathic hotels across Britain, but by then they had started to serve two types of visitor – the patient and the tourist. Gradually fewer guests came to Torquay as patients and more for a holiday; these middle-class and professional guests demanded leisure and recreational facilities. 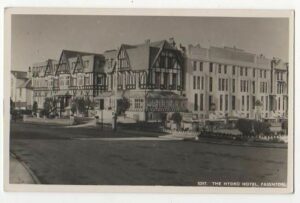 Torquay and Paignton Hydros then offered tennis courts, croquet lawns, and golf courses. The smoking of tobacco, once prohibited, became tolerated. Less acceptable was alcohol, many hydropathics originally being temperance institutions; but eventually hydros had to offer what the paying guest demanded and they became little different from other Torquay hotels, only the treatment rooms setting them apart. During the late twentieth century many moved away from therapeutic purposes altogether to become tourist hotels whilst retaining the name ‘Hydro’.

It wasn’t just hotels that offered the treatment. In 1937 the Marine Spa was “recognised by Medical Hydrologists” and offering internal or external “water remedies.” 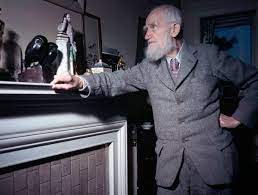 One famous visitor to Torquay’s Hydropathic Hotel was the Irish playwright George Bernard Shaw. Shaw wrote more than 60 plays and is the only person to have been awarded both a Nobel Prize for Literature (1925) and an Oscar (1938) for ‘Pygmalion’. He was a regular summer visitor and enjoyed visiting the nearby Vane Tower. He appreciated what Torquay had to offer, “No housekeeping, plenty of bathing, taxicabs to get around in, shops galore, and every sort of urban amenity”. In 1897 he used his knowledge of the resort to base one of his plays in the Bay. This was ‘You Never Can Tell’, which became the BBC Play of the Month in 1977. It was described at the time:

“Shaw’s comic tour-de-force is set beside the seaside where a holiday atmosphere prevails. Amidst the sunshine and sea air, against a background of a fancy dress party and luncheon, Shaw uses his lightest touch to explore the battle of the sexes, the absurdities of marriage and the generation gap.” 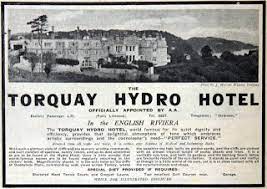 Always political and concerned with social issues, the outbreak of war in 1914 changed Shaw’s life, and it was during his time in Torquay that he wrote a series of letters to his fellow Fabians Sidney and Beatrice Webb. These letters discussed hostilities with Germany with one relating the arrest of the German novelist Hedwig Sonntag who was working as a hotel porter at the Hydro:

“I got a pathetic letter this morning from Hedwig Sonntag, thanking me in moving terms for being the only honest man in England. Later in the day, he, though registered, was handcuffed and deported to the innermost centre of Britain – to Exeter, in fact. And in the evening the Coastguard threatened to shoot me and Barker on our walk before going to bed, if we approached him (we were 50 yards off).” 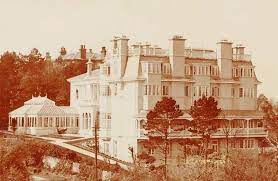 For Shaw, the conflict represented the bankruptcy of the system and while in Torquay he expressed his incendiary opinions in a series of newspaper articles under the title ‘Common Sense About the War‘. The essays appeared as a Special War Supplement to the New Statesman on November 14, 1914, and ‘Common Sense’ was reproduced in newspapers including the New York Times. Few public figures had dared to speak out in opposition to the war and the response to Shaw’s comments was predictable and vitriolic. The writing of ‘Common Sense’ cost Shaw greatly at the box-office. Many of his friends turned against him, he became one of the most despised men in England, and it was demanded that he should be tried for treason. Shaw later gave a copy of ‘Common Sense’ to a friend inscribed, “Written on the roof of the Hydro at Torquay”.