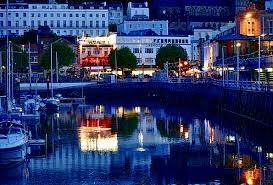 “So we all went down to the Esplanade, where the lager tastes like lemonade…” The Piranhas 1980

There’s something about Torquay Harbourside. For a couple of hundred years it’s been the focus of the town’s entertainment for tourists and locals. It’s witnessed Britain as the nation has changed. Almost all of our literary aristocracy walked along the Strand – Frankenstein author Mary Shelley, poet Percy Bysshe Shelley, Charles Dickens, Arthur Conan Doyle, HG Wells, George Bernard Shaw, James Joyce and many more. It’s seen American troops leaving for D Day, prostitutes plying their trade, Mods on their scooters, and skinheads brawling with bikers.

The Harbourside had its inns and pubs from the very beginning. In 1774 Andrew Brice, an Exeter printer, wrote in his Grand Gazetteer that, “at Tor Kay is a village and an inn or two”. Actually, there were five ‘houses of entertainment’ servicing a population of around 500. They were licensed ‘for man and beast’, and they were: 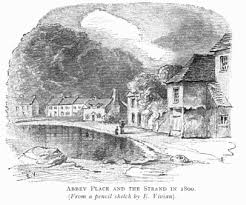 The Bird in the Hand. The landlady, Betty Cole, was noted as never giving credit and the motto on the hanging sign stated:

A bird in the hand is better far,
Than two birds in the bushes are.

The Bird in the Hand became the London Inn and then Wolfinden’s London Inn in 1840, and eventually the Royal Hotel. It’s now back on around the same site as the original London Inn, using the same name and run first by Wetherspoons and then by Yates. 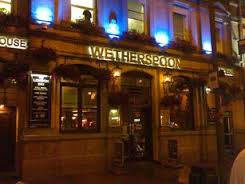 The Crown & Anchor on the site of 6 & 7 Victoria Parade. In 1844 it changed to The Steam Packet and burned down shortly after. 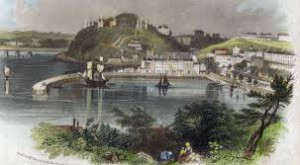 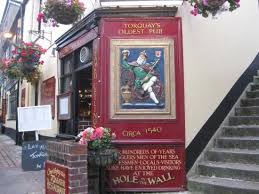 The Marine Tavern. A one-storey pub situated in front of the Pavilion. In January 1893 the landlord was accused of assaulting a policeman and for being drunk and disorderly. However, the defence argued that he was sober and that he had only taken offence when a passing policeman had accused his wife of being “a woman of loose character”. We’re back to the Harbourside as the haunt of prostitutes.

According to the landlord, he had been waiting at the Fish Quay for the arrival of the ferry which brought in a good deal of custom, leaving his wife unaccompanied. A policeman had approached his wife and that’s where reports differ. The police said the landlord went berserk and had to be restrained by a number of officers both at the Harbourside and later in the police station – the landlord said that he was assaulted and badly beaten. Despite a number of witnesses saying that the landlord was of good character and had not been drinking, and accusations that Torquay’s police had a reputation for being heavy handed, the court accepted the testimony of the police and he was jailed and lost his living. 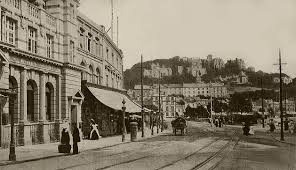 For many years the pub was under threat. In 1918 local anti-alcohol temperance organisations campaigned to close it down, and later the council wanted the site for a bus station. In the 1970s the Tavern became well known throughout the country as Torquay’s bikers’ pub, with one bar being advertised as ‘strictly bikers only’. The pub was a shrine to biking with well-known biker Max (the Axe) as a barman, and it featured a prominent sign saying: ‘No Junkies Drunks Served’.   The Marine Tavern was demolished in September 1988. 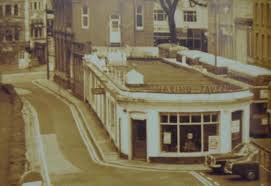 The Shallop, This eventually became the Yacht – now under yet another name. In July 3 1976 a review was written of the Yacht which recognised its national reputation:

“The juke box at the Yacht Hotel, Victoria Parade rocks out The Boys are Back in Town. And they are. It’s the height of the summer season in Torquay and lads from all over Britain are bevying it up in the long dark music bar. The girls are with them, indistinguishable with their long hair hanging over sweat shirts and faded jeans.

This is Torquay’s most notorious public house which attracts the wild, the youthful and the unemployed. At a time of year when Torquay is one of the ‘in’ towns in the country, the Yacht is the ‘innest’ place of all. 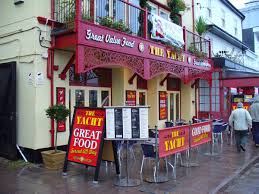 “This pub”, shouts landlord Ernie Garnham above the thundering music “is one of the best known in Britain. People from Blackburn or Bradford, Leeds or Glasgow say ‘see you in the Yacht’ when they move south. And they do.”

The Yacht throws open its doors night after night at 5.30 to its lean, often hungry, barefooted youngsters and dead on the dot of 11.00 sweeps them out again with long handled wide beamed brooms. “It’s a gimmick really,” said Ernie. “Me and the boys from behind the bar line up and sweep everybody to the door. It’s all taken good naturedly.”

Likely to be swept out with them are plain clothed members of the drug squad and others representing the Establishment who mingle with the Yacht’s motley collection of customers…  The Yacht has not always been such an infamous establishment in the eyes of locals. Once upon a time it was a quiet haunt for fishermen but its character changed radically at the time Rock and Roll was introduced in the Teddy Boy era…

Ernie and Paula have now been at the Yacht for nine years and slowly but surely have cleaned the place up to a point where, despite its reputation, very little violence occurs. “The first year was the worst,” said Paula. “There was one fight where all Ernie had left on was his pants and a collar. He just come to me and said ‘Get me another shirt, Love.”

“Once you’ve got a bad name it’s hard to get rid of”, said Ernie. “People picked up drunk in the Strand have often been quoted in Court as coming from the Yacht when it isn’t true. I say to the police ‘Come on, be fair. There are a lot of licensed premises in the area.” 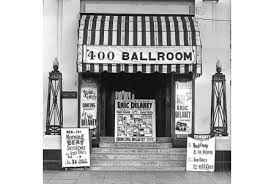 The Yacht is a Courage house but the drink most popular is cider because it’s cheaper for a large percentage of Ernie’s customers. One thing that Ernie and Paula would like to see is more local people dropping in: “They seem to think we have more villains in here than Alcatraz, but it’s not true.”

Despite Ernie’s stringent denials the Harbourside, like many seaside resorts, did have a real reputation for violence and disorder. Over the years that reputation does seem to have subsided to a degree as drinking habits have changed, policing has improved and gang-related skirmishing has gone out of fashion. Reminding us of how it was, here’s the Piranhas: