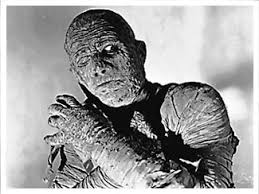 “Beware the beat of the cloth wrapped feet”, The Mummy’s Shroud (1967)

One of the rewards of writing articles on the weirder side of Torquay is that people come forward with things they have heard about our town. Often these are about the supernatural, such as ghost sightings or old folk stories. We also receive a variety of more modern urban legends – these could be stories imported from other places or tales mixed up in the telling. Occasionally, though, we can get in right at the start of an original Torquay urban legend.

Urban legends usually have macabre elements rooted in local popular culture and people frequently allege that such tales happened to a “friend of a friend” or FOAF. Now we have a legend that appears to be taking root in Torquay and which focuses on our museum – which is rapidly acquiring the reputation for being haunted by the risen spirit of an Egyptian mummy. 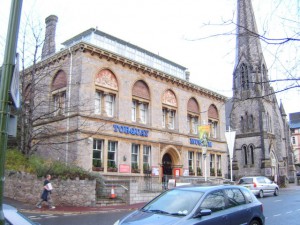 “Ghost hunters ‘freaked out’ after finger-and-thumb fingerprints appear on inside of mummy case at Torquay Museum”.

This manifestation was first spotted on a 2015 ‘Night at the Museum’ Ghost Hunt event run by the museum and the ‘Real Investigators of the Paranormal’.

Our main source comes from the museum’s enthusiastic marketing manager Carl Smith. Carl told the newspapers that on the ghost hunt there was “quite a lot of activity” while, “The weirdest thing was that we have a mummy, which we believe is Devon’s only human mummy. During the night on the inside of the case we saw what we believe were handprints. It was a pretty clear two fingers and a thumb. The case had not been opened for seven years and last time it was opened took seven men to open it. It was impossible for it to be opened by someone else. It was definitely the highlight of the evening and something that we cannot explain as they were not there before the evening. It freaked a few people out. We also had some Victorian artefacts that people had a chance to handle and try and get a feel of their history. We then finished with a spirit board where a few contacts with the dead were made.” 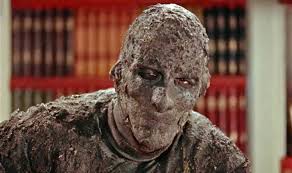 In July of the same year the Daily Mail had described another apparition, this time captured on camera: “Spooky snap of candlelit female ‘ghost’ terrifies museum staff after it was captured creeping between the artefacts. The saucy spectre – who spotters say has yellow locks and shows off her cleavage – has previously been caught on camera sashaying down the corridors.” One particularly enthusiastic ghost hunter went on to say, “This blonde bombshell certainly sent a chill up my spine. Who knew ghosts could be so sexy? She could haunt my house and give me nightmares any day of the week. I certainly wouldn’t want to see her busted.” Perhaps it’s sometimes best not to say things like this out loud?

Getting a bit overexcited, the reporter then referred to the spectre’s, “reign of terror” though all involved seem to have just been intrigued by the image. Carl helpfully described the photographed apparition, “She was wearing old clothing showing off all her assets as she emerged from the floor and cast her eyes down towards a light. We saw something in the middle of the photo and when we adjusted the contrast we clearly saw the woman. It was a bit of a surprise and pretty creepy. From the angle of the photograph it looks like she is submerged into the floor, almost like she is below floor level. There was no one else present when the photo was taken so we are at a loss to explain it. It is a bit of a mystery, and there seems to be no other explanation.” 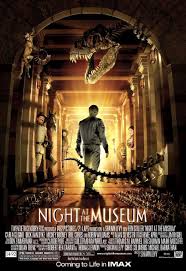 Oddly, in the Daily Mirror of October 19 we learned that, rather than the prints being from the child mummy who, after all, was the occupant of the display case, Britain’s “sexiest ghost” was the culprit. “The blonde apparition has been seen on camera flashing her cleavage, but this is the first fingerprint left behind… A blonde spook left her finger and thumb prints inside a mummy case, according to ghost-hunters seeking evidence of Britain’s sexiest ghoul”. (Just to be pedantic, a ghoul isn’t a ghost as such but an evil spirit associated with graveyards and the consumption of human flesh.)

According to the irrepressible Carl, “Most of the equipment in the Old Farmhouse (part of the museum) was left to us by a benefactor, and the oldest chair in the collection has been dated at around 300 years old. All of the furniture and equipment has had a lot of human interaction, and maybe this is where the energy has come from. We’ve had a lot of spooky activity at the museum. Books will just fly off the shelves in the shop and people have said they have spotted a Victorian lady in a blue dress.”

Such supernatural shenanigans don’t appear to have been much of an issue for the museum in the past, however. No earlier reports seem to have come out of the museum of anything particularly unusual. Presumably the orthodox Anglican rationalists and scientists who built the museum would have been perplexed at the building’s growing association with the supernatural. It may worth noting at this stage that the museum was facing cuts of over 40 per cent in its grant from Torbay Council when the innovative promotion was launched. It’s certainly an achievement to attain national newspaper attention just when you need more paying customers. Sceptics may also want to point out that the fingerprints may just as easily be smears on the glass which had been unnoticed until someone shone a powerful torch on the exhibit. 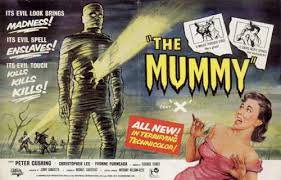 It could similarly be just a coincidence that in 2006 the movie ‘Night at the Museum’ had Ben Stiller as a museum security guard discovering an ancient Egyptian curse that causes the exhibits to come to life and wreak havoc. Note how Torquay’s museum used the same title. Since then the idea of a haunted museum seems to have become quite popular. In 2013 the Manchester Museum had a 4,000 year old Egyptian statue which was reported as having rotated its display cabinet; and in 2014 a couple claimed that that their photographs of York’s Castle Museum were being haunted by a Victorian girl – they were “left terrified by the spooky images.” 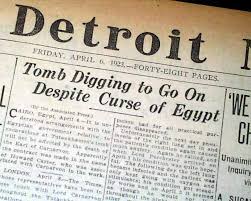 So why were the fingerprints ascribed to the “saucy spectre” rather than the mummy? It may be that the idea of a 4-year-old ghost was a little distasteful and so the manifestation was passed on to an appropriate adult. The death of a child is disturbing in itself, the idea of an eternally imprisoned infant so much more so – particularly if your museum is targeting a family audience. Nevertheless, museum sensitivities haven’t prevented the urban legend from ascribing the finger prints to the juvenile and bandaged spirit as it nightly attempts to escape its display case. 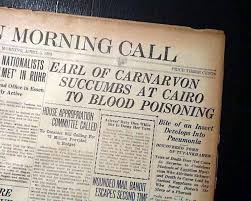 Indeed, it’s not easy keeping an Egyptian mummy down. The mummy seems to present the exotic allure of the pyramids with their ornate sarcophagi, the endless shifting sands of the desert and the so-called ‘curse of the pharaohs’. Though real curses inscribed within tombs are rare, there have been stories of bad things happening to tomb raisers going back to the 19th century. These multiplied after Howard Carter’s discovery of the Tomb of Tutankhamen in 1922. Despite popular myth, no curse was actually found inscribed in the Pharaoh’s tomb and the expedition’s mortality rate was no higher than to be expected among the imperial British at the time. 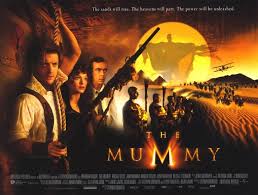 We don’t really know where the notion of the living mummy comes from, though it appears to be purely fictional. There is no evidence to suggest that the Egyptians believed in re-animated mummies. Mummification was a sacred process meant to prepare a dead body to carry the soul through the afterlife, not for being reincarnated and living again in a Devon museum. Nevertheless, as early as 1827, there were stories published on the subject and emerging filmmakers immediately took up the theme. Directed by Georges Melies in 1899, ‘Cleopatra’s Tomb’, is believed to have been the first mummy film. In 1932, a decade after Tutankhamen’s discovery, Boris Karloff’s ‘The Mummy’ was closely modelled on the story of the famous find – it received a sort of remake with 1999’s ‘The Mummy’, a big-budget special effects movie that starred Brendan Fraser as an American explorer. In 1958, Britain’s Hammer Films released their version of ‘The Mummy’, starring Peter Cushing and Christopher Lee. As a consequence of this kind of ancient Egyptian overload, we’re all familiar with the mummy. 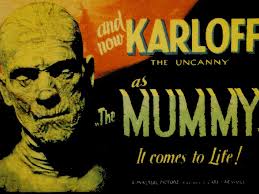 So, despite attempts to pass on the responsibility for poor afterlife housekeeping, Torquay has a new and evolving urban legend – when the lights go out in the museum, the dead walk. Fortunately, we only have a small and harmless prepubescent revenant in town. On the other hand, indicating what can happen when you have an adult and irritated mummy on the loose, here’s the trailer for Hammer’s 1959 classic: