‘The Hole in the Wall’ is promoted as, “the oldest pub in Torquay”.

The marketing continues, “This historic tavern has been serving the likes of smugglers, men-of-the-sea and business men since around 1540.”

Similarly, the ‘Minerva Inn’ “is Plymouth’s oldest public house, circa 1540”.

And there are many other ‘public houses’ around the country which have likewise been around since 1540. Is this a coincidence? Was there really a burst of inn openings in that year? 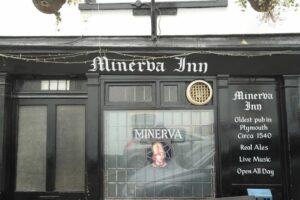 One suggestion is that it’s something to do with the Reformation.

The separation of the Church of England from Rome began in 1529 and was completed in 1537, bringing England alongside a broad Reformation movement. Locally, Torre Abbey’s canons surrendered to Henry VIII’s commissioner in 1539 at the Dissolution of the Monasteries.

This was certainly a revolution in land ownership and religious practice in the Bay and the medieval church had an association with alcohol-fuelled merry-making. The church ale was, for example, a fundraising occasion for the parish that would include music and dancing; and we know that parish ales did encounter opposition during the Reformation. So could a new inn be the outcome of the Church losing its ability to entertain with alcohol? This is possible though many parish ales survived and the harbour side population was only a few hundred so probably too few to stimulate the local intoxication economy. Accordingly, this doesn’t seem to be a direct cause of a wave of inn building.

Furthermore, the building wasn’t always a ‘tavern’. It is noticeable that ‘The Hole in the Wall’ wasn’t one of those “five houses of entertainment” in Torquay that Andrew Brice listed in his Grand Gazetteer when he visited in 1774. It therefore seems to only have begun to trade long after 1540. Narrowing down when the ‘pub’ opened is John Salter’s 1890s sketch of a narrow alley leading off, what is now, Park Lane. The sketch is reproduced by Ellis who describes the lane, “Between the clothes lines is another old public house The Hole in the Wall, which has existed there well over a century”. We know that it was an alehouse in 1861 as John Berry was the Inn Keeper; while it is named in the 1871 and 1911 census. Yet, this does suggest that the inn wasn’t in existence until at least the end of the eighteenth century, even if the building itself is much older. 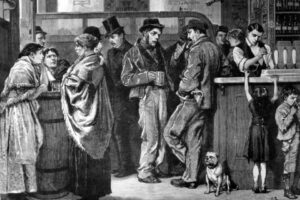 Definitions between alehouses, inns, and taverns are a bit vague. Strictly speaking the Hole in the Wall wasn’t an inn as these were generally a complex of buildings set around a courtyard, often comprising a gatehouse, a hall where guests were entertained, a suite of rooms for superior guests and lodging to accommodate lesser guests. Often taverns and alehouses were indistinguishable from private houses- it wasn’t until the 19th century that we get pubs as we know them today.

On the other hand, many old buildings were multi-use, including as a home, workshop, retail premises, store room etc. The ‘Hole in the Wall’ was built for some practical use, perhaps as a ship’s chandler or rope store which could have also sold beer and cider. And so it’s quite reasonable to say that the ‘Hole in the Wall’ has been making some kind of alcoholic offer for as long as it has been there- but we don’t know when that construction date was.

It’s recognised that the medieval period ended with Henry’s revolution and the dissolution of the monasteries in 1540. This is where the association with the Reformation comes in. People had little access to accurate written records and it looks like the 1540 date was an educated guess for the genesis of any old building that wasn’t obviously medieval.
In effect it was an advertising slogan for: “This is one of the oldest pubs in the country”. Such pubs often completed the package by boasting a famous visitor and a ghost. Note how, in other places, Tudor-period alehouses seem to be promoted with “Shakespeare used to drink in here” stories.

So what do we know about the name.

‘The Hole-in-the-Wall’ has been an official name or a nickname for a number of very small pubs since at least the 1690s. It was borrowed from the much older term for any obscure or dingy business. In 1816 a hole in the wall referred to a “small and unpretentious place.”

In 1867 Jacob Larwood and John Camden Hotten in “The History of Signboards: From the Earliest Times to the Present Day’ said that, “Generally it is believed to refer to some snug corner, perhaps near the town walls”. They also comment that it also referred to “the hole made in the wall of the debtors’ or other prisons, through which the poor prisoners received the money, broken meat, or other donations of the charitably inclined”.

Indeed, there may have been in a literal hole in the wall of the Torquay building to pass drinks to outside customers. Another use of the term was for a place illegally selling alcohol. If this is its origin, we may have a link to the Gin Craze of the first half of the eighteenth century when gin shops or ‘dram shops’ sold gin mostly to take away, or to drink standing up. Parliament passed five major Acts, in 1729, 1736, 1743, 1747 and 1751, designed to control the consumption of the “throat-searing, eye-reddening, vomit-churning hell broth”. 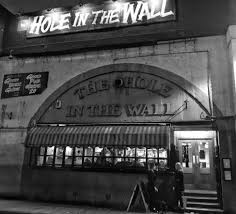 In the twentieth century, ‘hole in the wall’ largely lost its negative connotations and came to describe any discreet informal establishment, often known only to regular customers, hidden in a side street or behind a larger building. There’s a ‘Hole in the Wall’ built into a Waterloo railway viaduct, for instance.

That all seems quite straightforward. There still, however, seems to be room for myth-making. To take one example, Bristol’s ‘Hole in the Wall’ proclaims the romantic. The pub was, apparently, “named after a spy hole that enabled eighteenth century sailors and smugglers to keep watch for customs men and press gangs”. As Torquay has a tendency to import and adapt tales from other places, don’t be surprised if that embellishment eventually gets attached to Torquay’s most ancient hostelry. 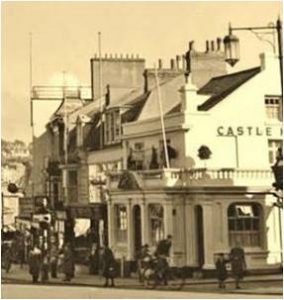 Incidentally, if we are looking for the earliest Torquay pub actually built for that purpose, we need to journey to the other end of town. It’s the Castle, dating from 1837 and almost continually in use since then.