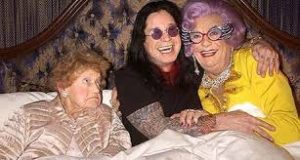 Here at WASD we like to remember local folk who went on to greater things. This time it’s Torquay-born Patricia Emily Perry (1907-2008). Patricia was an English actress and dancer, but is perhaps best known as Madge Allsop, Dame Edna Everage’s silent friend from Palmerston North, New Zealand. 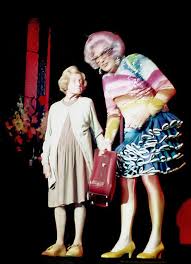 Patricia first worked on stage at Birmingham’s Theatre Royal at the age of four. She then appeared as a singer, dancer and actress in pantomime and music halls, including playing the role of Susan in The Desert Song for 12 years. During the War, she performed with ENSA. In 1960, Patricia founded a children’s dancing school, The Patricia Perry Academy of Dancing in London, which she ran for 25 years before deciding to return to acting in 1984. 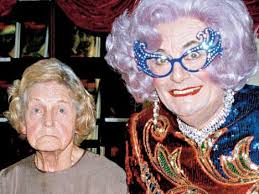 Patricia wasn’t the first Madge Allsop. Madge, a character created by Barry Humphries during the 1960s, was initially only mentioned in passing by Dame Edna and didn’t actually appear on stage until the late 1970s, when she was played by a different actress. In the 1987 film Les Patterson Saves the World, Madge was portrayed by Connie Hobbs. Later that year, Humphries decided to cast a ‘definitive Madge’ for his new TV series The Dame Edna Experience. He auditioned many actresses: “All of them tried too hard. Some were whimsical, some camp, but most were far too over the top to resemble an oppressed, inarticulate New Zealand spinster whom life had passed by.” 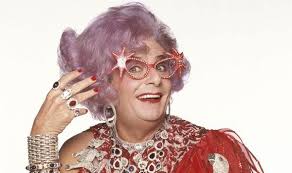 Patricia’s audition, however, was successful. She then appeared in The Dame Edna Experience and in many of Humphries’ other TV specials. Her last on-screen appearance as Madge Allsop was a cameo in the TV special Dame Edna Live at the Palace in 2003, in which the 97-year-old actress was caught in bed with Ozzy Osbourne.

Patricia was 100 years of age when she died in 2008. Here you can see Dame Edna’s bridesmaid demonstrating the wonderful prizes you could win in the 90s game show ‘Dame Edna’s Neighbourhood Watch: