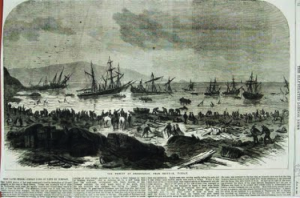 Even though Torbay is an east-facing natural harbour and a refuge, the Shipwreck Index of the British Isles still records 114 shipwrecks. These are only Torquay and Paignton’s known wrecks from the past 300 years and the review excludes the hundreds from the Brixham/Berry Head area.

While many wrecks were isolated incidents, 46 ships were lost during the night of January 10 1866 when a ‘Great Hurricane’ caught vessels sheltering at anchor in the Bay. A report at the time records, “From Brixham to Goodrington the shore was dotted with wrecks. At Broadsands nine ships were on shore”. Some 77 people lost their lives that night. The aftermath is shown in the newspaper image  above.

Even if a ship made it to shore, it wasn’t safe.

In 1750 the brig St Peter was wrecked, “about a mile west of Torre Abbey. Immediately, the country people came down to plunder the wreck and even robbed the captain of his watch.”

And in 1751 the wreck of a French vessel under Waldon Cliff nearly led to a battle between the locals of Torre and the Torwood estate. Waldon Hill was Cary ground, but, “the Torwood men came along from the harbour with the local customs officer and did “much pillaging and wanton damage”.

The Cary steward strengthened his forces by recruiting half a dozen men from the neighbouring Cockington estate and overawed the Torwood people. We don’t know what happened to the luckless French sailors while the locals were ransacking the ship. 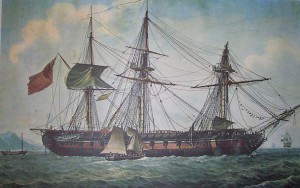 While it’s a massive task to describe all of Torbay’s wrecks, a few from Roundham Head give an idea of the range of vessels that have left remains on the sea floor.

In February 1762, HMS Savage, a sloop-of-war of 144 tons, was driven ashore in an easterly gale and soon became a total loss, though all her guns were salvaged. Her remains lie 250 yards south of the beach in under 9m of water. 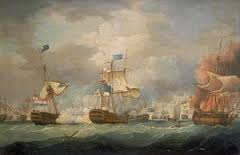 Another victim of Roundham is HMS Venerable, a 74-gun third rate ship of the line, launched in 1784 (pictured above). In 1797, the Venerable served as Admiral Duncan’s flagship at the Battle of Camperdown (pictured in action above). The Venerable was driven against rocks on the night of 24, 1804 (pictured below). Other ships rescued 547 men, though eight drowned, including the midshipman and two sailors. The guns of the Venerable were salvaged – divers have since found cannonballs and lead shot from the wreckage which lies 350 yards to the south east of the southern end of the beach.

After the First World War, two German torpedo boat destroyers were under tow from Cherbourg to Teignmouth for scrapping. On December 12, 1920, a strong wind from the east turned into a gale and one was driven onto the rocks near Roundham Head and broke her back. 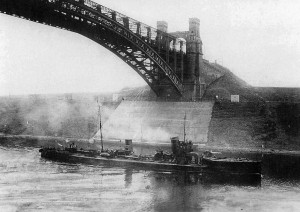 During the night the second went aground on Preston Beach, though she was not so badly damaged as the first and was towed away the next day. Pieces of the first ship, the T-189, (pictured above) can still be seen in less than 9m of water about 200 yards south of the beach.

Over the past two millenia countless ships have been wrecked off our shores, from the Bronze Age to the present day.  Thousands of lives have also been lost in the natural harbour of the Bay.