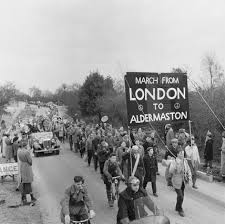 On 2 November 1957, the New Statesman magazine published an article by JB Priestly on ‘Britain and the Nuclear Bombs’, which called for British unilateral nuclear disarmament. The journal received many letters of support, reflecting the growth in opposition to nuclear weapons following Britain’s recent H-bomb tests. 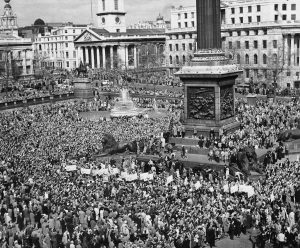 At the end of November, a meeting was held to launch the Campaign for Nuclear Disarmament. CND held an inaugural public meeting at Central Hall, Westminster, on 17 February 1958, attended by five thousand people. The new organisation attracted considerable public sympathy and attracted support from scientists, religious leaders, academics, journalists, writers, actors and musicians. 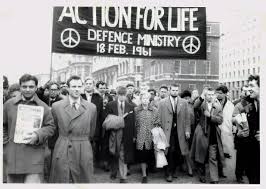 The symbol adopted by CND, designed the same year, became an international peace symbol. It was based on the semaphore symbols for ‘N’ and ‘D’ (for Nuclear Disarmament) within a circle. 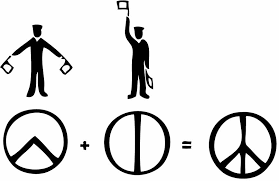 To progress CND’s aim of nuclear disarmament, the Aldermaston marches were organised. These were protest demonstrations that took place on Easter weekend in the 1950s and 1960s between the Atomic Weapons Research Establishment at Aldermaston in Berkshire and London, over a distance of 52 miles. Some 60,000 people participated in the 1959 march and 150,000 in the 1961 and 1962 marches. 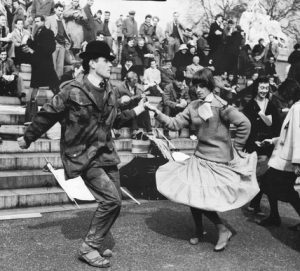 The first major Aldermaston march took place at Easter 1958 when several thousand people marched for four days from Trafalgar Square to Aldermaston. After 1958 the marches were held annually, 1959-1963, but their direction was reversed, from Aldermaston to London. 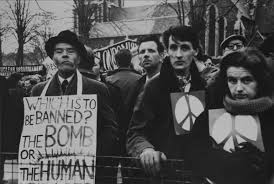 One of those attending the 1960 March was the honorary secretary of the Torquay branch of CND, postman Tony Best of Shiphay. Tony was also the assistant secretary of the local branch of the Union of Post Office Workers and had been active in the Labour Party, but had resigned after Labour refused to call for nuclear disarmament. 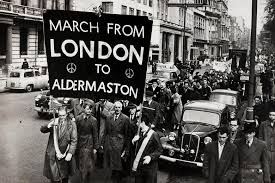 Tony was impressed with the many foreigners on the March including a group of Japanese protesters. In an interview with the Torquay Times, Tony explained his reasons for opposing nuclear weapons. Among these were his fears for his 8-year-old daughter: “I don’t want her to grow up in the shadow of the H-bomb, and the fall-out from more and more tests makes it increasingly dangerous. I feel it’s the only cause worth supporting because if you do not support it, there won’t be any other cause to support.”

Here are the original Aldermaston marchers:

For more local history, news and info, go to our home page or you can join us over on Facebook or Twitter.