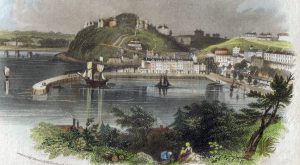 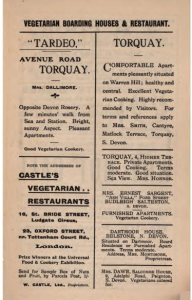 It wasn’t just our tourists – such as the poet Percy Bysshe Shelley who visited in 1815 (pictured below) – who favoured a meat-free diet, however. As Torquay was the richest town in England we became home to a committed and active vegetarian subculture. 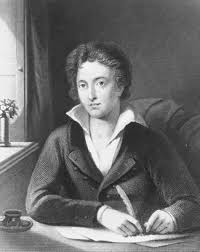 In the early days vegetarians were catered for by temperance hotels and dining rooms, but by 1889 a thriving vegetarianism could boast 52 dedicated vegetarian restaurants across Britain with 34 in London alone. These restaurants offered cheap and nutritious meals in respectable settings – indeed, 1870s Manchester had more vegetarian restaurants than it does today. The public were invited to enjoy elaborate banquets and many vegetarian cookbooks were published. Varieties of porridge such as maize-mash and wheaten were popular along with other recipes, such as: vegetable goose, stuffing minus the bird; lentil cutlet with tomato sauce; steak-pie in a vegetable form; rump-steak from pot herbs; and macaroni. 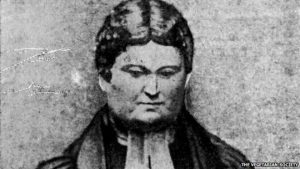 Of course, vegetarianism wasn’t a new thing. The sixth century BC Greek mathematician Pythagoras promoted non-violent vegetarianism – a diet without any animal products was actually called a ‘Pythagorean’ diet until 1944.

In Britain a tiny Christian sect in Salford was the birthplace of the modern meat-free diet – the bizarrely-named Beefsteak Chapel. Born in 1763 the Reverend William Cowherd (pictured above) demanded his congregation – aptly named Cowherdites – abstain from meat. He believed that God inhabited every animal and so it was a sin to consume them. William’s chapel became a working class institution – it was a school, a science academy, a library, had its own printing press, provided medical services, and free vegetable soup. After William’s death in 1816, Joseph Brotherton became the Beefsteak Chapel’s minister and, along with other Cowherdites, helped form the Vegetarian Society in 1847. Local vegetarian associations were then set up to promote the idea, and by 1851 the Oxford English Dictionary found it necessary to define a new concept, “Vegetarianism: a modern term, employed to designate the view that man ought to subsist on the direct productions of the vegetable kingdom and totally abstain from flesh and blood.” 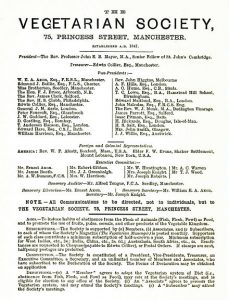 Torquay’s vegetarians were a small but highly motivated group. Many believed in a simple life and ‘pure’ food, humanitarian ideals and strict moral principles. Consequently, vegetarianism was frequently linked with other radical and reform movements, such as the opposition to alcohol and the smoking of tobacco, the right to vote and even nudism. Along with other reform organisations, women were well represented though, as was usual at the time, their proportions in the rank and file were not reflected in the leadership. Perhaps inevitably, the movement attracted colourful and eccentric leaders and supporters. 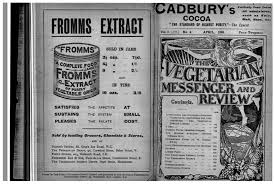 Promoting a vegetarian lifestyle to the people of Torquay, a Mr Knight from Sidmouth delivered a lecture at Torquay’s Temperance Hall In July 1849. The title of the lecture was ‘Vegetarianism, or the advantage of a strictly vegetable diet’. Yet, the ‘vegetarianism’ of Mr Knight and his followers was more what we would know today as veganism – from the 1840s onward, British ‘vegetarianism’ had prohibited any animal by-products, including milk and cheese, that could have resulted from an animal’s confinement or slaughter. 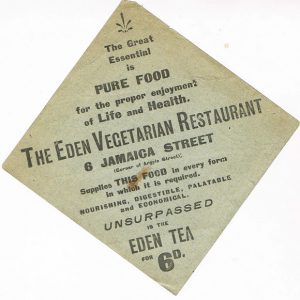 Health was one of the great obsessions of the Victorians. In Torquay, as elsewhere, there were frequent and devastating outbreaks of disease and so Mr Knight began his lecture by stressing the health benefits in contrast to a meat-based diet: “The first benefit is medicinal”, he argued. “A diet which excludes meat is better for the health and more likely to help in the avoidance of certain types of disease as well as having curative properties. Animal food is less wholesome and less nutritious than many kinds of grain, fruits, and vegetables”. As evidence of the dangers of meat-eating, Mr Knight, “gave some frightful proofs of the extent to which disease was produced amongst the poor by the use of unwholesome meat.” 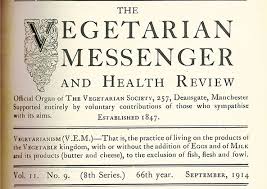 As a Victorian Christian, it was not surprising that he looked to the Bible for support in his argument that man should not eat ‘flesh’ (Genesis 9.3). For many such Christian vegetarians, God was in everything and so to kill anything was like ‘killing a little bit of God’. Knight, therefore, put his regard for animals into a ‘historical’ Biblical setting: “Man at his first creation when in a state of perfection, and during the Antediluvian period when life was of tenfold duration, was exclusively a vegetarian. Although permission was subsequently given for the destruction of animal life, still when not necessary for the sustenance of man it was an act of wanton cruelty.”

Thus, activists such as Knight supported vegetarianism as they saw the treatment of animals as barbaric. Vivid descriptions of slaughterhouses were presented to the Torquay meeting which suggested that a path to true morality could only be achieved if “wholesale murder and brutality” were abolished. 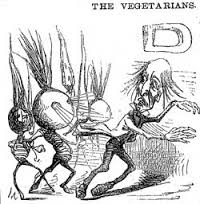 Victorian vegetarians were largely from the educated middle class and publicly claimed the higher moral ground. There was then a tendency to look down on meat-eaters, particularly those of a lower social class. Specifically, they believed that it was a lack of self-control among the poor that contributed to violence and crime and so, as carnivorous animals were ferocious, eating no meat would calm the most war-like person, group or even nation. Knight could then claim, “That the influence of animal food upon the character was to excite the savage passions, as evidenced in different nations.” 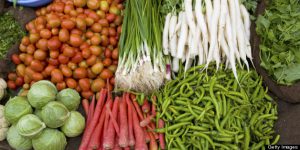 Unfortunately, attitudes such as this may have contributed to Torquay’s working class remaining largely immune to the many appeals directed at them, despite a meat-free diet being inexpensive -Victorian workers were also suspicious as they suspected a covert excuse for lowering their wages. 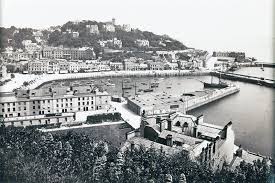 At the other end of the social spectrum, Mr Knight’s argument was also rejected by his affluent Torquay Temperance Society’ audience. While remaining polite, they wished to make it clear that their main enemy was the imbibing of alcohol and not the consumption of meat. Possibly recognising the eccentric and utopian reputation of the vegetarian campaigners, and wary of too close an association, our local alcohol abstainers issued a statement of clarification. “A strong distinction should be made”, our town’s teetotal campaigners argued “between the evils arising from the use of animal food and alcoholic liquors, the former being objectionable only when taken in excess, the latter being wholly innutritious, and injurious even in the smallest quantities. Temperance was the rule in one case, total abstinence in the other.” 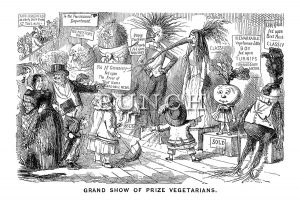 By the end of the nineteenth century, however, vegetarianism became less popular. This may have been due to meat having become cheaper, but it may also be the consequence of a hostile media – the satirical magazine Punch, for instance (pictured above), misrepresented the vegetarian diet and portrayed the aversion to meat-eating as naive, sentimental and elitist. It was also claimed that a vegetarian diet was unhealthy. For example, Torquay-resident George Bernard Shaw was famously told by a team of doctors that he needed to eat meat or starve – he lived until the age of 94. 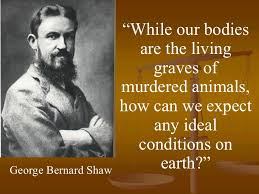 Nevertheless, the vegetarian tradition progressed and by the late twentieth and early twenty first centuries had grown significantly. Britain now has the third highest rate of vegetarianism in Europe – the country with the highest rate is Italy with 10% of the population being vegetarian, followed by Germany, with 9% of the population. In the UK vegetarians constitute 7 per cent to 11 per cent of the UK adult population- around 4 million people. Torquay’s early vegetarian pioneers, though often vilified at the time, began a movement that continues to flourish throughout Torbay.