The granddaughter of a patient at Torbay Hospital has presented £688 to the staff treating him after completing her first triathlon – the tough Ironman.

Lily Chubb, 23, bravely decided to attempt her daunting long-distance triathlon in aid of the Ricky Grant Unit, in the name of her grandad Raymond Chubb who is currently being treated and, she says, is ‘doing well’.

The Ricky Grant Unit, run by Torbay and South Devon NHS Foundation Trust, is a haematology/oncology day centre providing chemotherapy and associated treatments, education and advice on an outpatient basis.

Lily conquered the arduous 2.5-mile swim, 110-mile cycle and 26-mile run in 17 hours without a break. She said: “I managed to raise £688 which I was pretty chuffed with as it was one of the hardest things I have done from start to finish!”

Lee Merry, Senior Nurse Practitioner, said: “Donations make such a big difference, they help us to improve the equipment, environment and information we provide to patients with a cancer diagnosis. This is an amazing personal achievement, as a keen cyclist myself I can’t imagine the physical and mental strength required to combine a 100 mile bike ride with swimming and running a marathon.”

Lily added: “I have always liked to push myself physically and mentally and after doing several half marathons and a marathon I wanted to find that next challenge. An Iron Man event combines swimming and cycling as well as running which made it interesting and fun to train for due to the variety.” 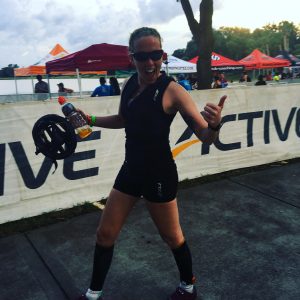 She trained for hours daily: “It was really hard to keep this going, but I had to. I think I trained for around five months which in hindsight probably wasn’t enough as I only just finished the event in the allotted time.”

Of the actual event in Florida, she said: “It was such an amazing day in terms of the support and adrenaline and that’s probably what got me through it. Also I was motivated by everyone following me on the Iron Man App online and the added pressure that I was doing it for charity and in aid of the treatment my grandad was going through.

“The worst bit was in the distance I could hear the MC congratulating every person that finished and knowing I still had 10 miles to run. I was incredibly happy and relieved and just thankful that I managed to finish when I crossed the line. I cried – just so glad it was over but also such a great memory to have and to have put my mind to completing it and actually doing it.”

The money will be spent on the Ricky Grant unit and Turner Ward. The wards are updating all 24 patient treatment chairs and the donation will be put towards this.