Exmouth RNLI crew and volunteers were saddened this week to learn of the death of long term Exmouth RNLI volunteer, Don Hodgkinson, on 12th June 2021, after a short illness.

Don, 80, was a retired Herts Fire Brigade Officer, well known in Exmouth and a popular and respected volunteer at Exmouth RNLI, where he had performed exemplary service for over 24 years. 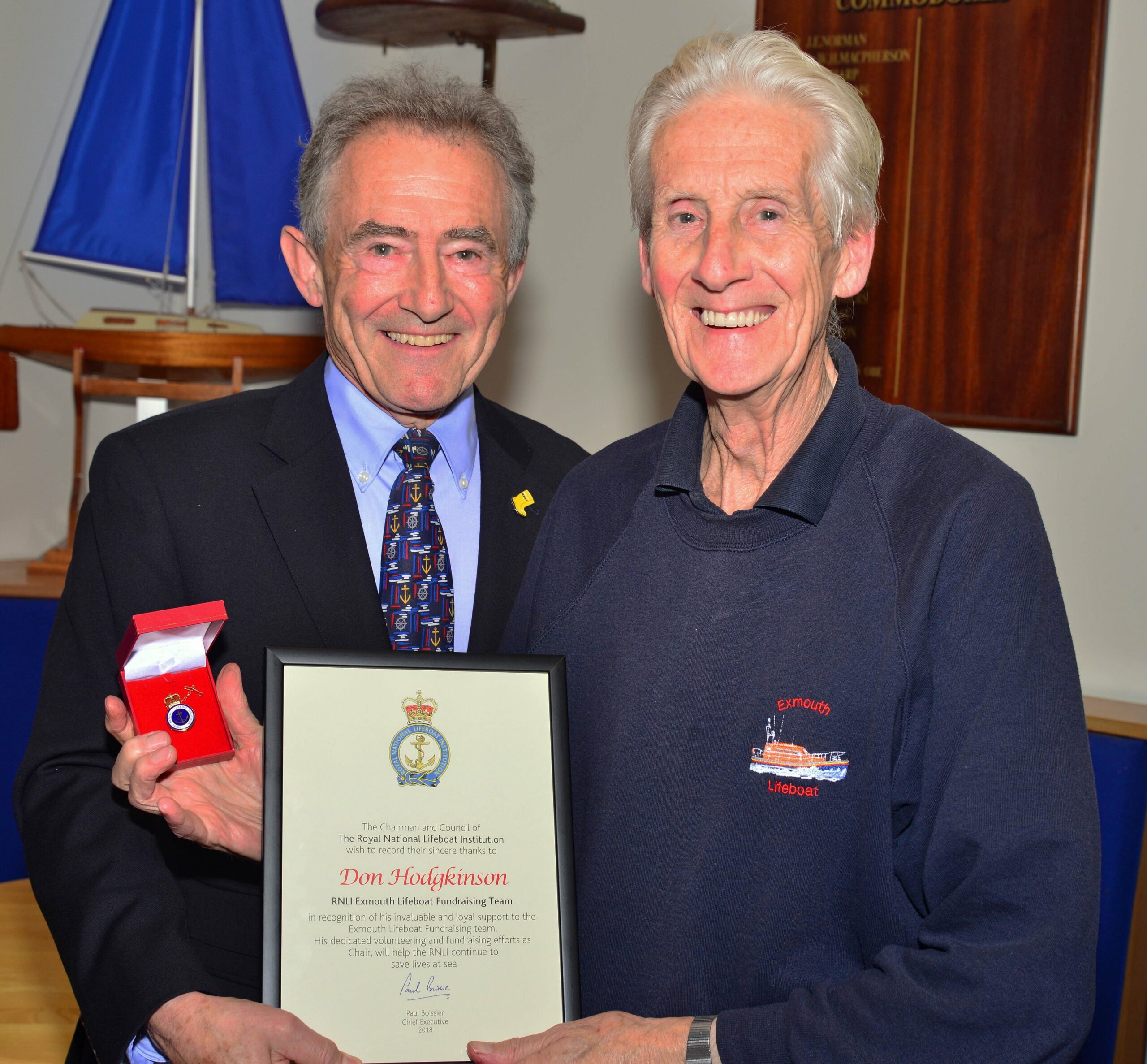 He started as a volunteer Box Secretary in June 1998, Deputy Launch Authority and Sea Safety Advisor from June 2003 until May 2011, Exmouth RNLI Boathouse Manager from 2011 to the present and became Chair of the Fundraising Team in 2007 – a post he held for 11 years.

In 2018 he received his RNLI Badge and Certificate for completing 20 years exemplary service with the Lifesaving Charity from the then Chairman of the RNLI, Charles Hunter-Pease, “in recognition of his invaluable and loyal support to the Exmouth Lifeboat Fundraising Team. His dedicated volunteering and fundraising efforts as Chair, will help the RNLI to continue to save lives at sea.”

Past and present volunteers at Exmouth Lifeboat Station paid their respects to Don.

Past Exmouth RNLI Lifeboat Operations Manager, Kevin Riley, said, “There are many things and lots of individual things to say about Don and his dedication to the RNLI, which went way beyond the roles he carried out with dedication, compassion and understanding, but his love for the RNLI and ‘His Crew’ was second to none.

“Don was the the quiet (well sometimes!) fundraiser, but many people will not know the other roles he carried out, taking him past the realms of just being a volunteer. How many crew, fundraisers and supporters knew that he served the RNLI as a Box Collector, Sea Safety Advisor, Station Manager and very important to me as the Ops Manager served as a Deputy Launching Authority.

“They were the Official roles, but in his spare time he was not slow in coming forward in the very mundane menial tasks around the station. From keeping the galley, to the toilets and many other jobs around the station in keeping it pristine for the public, crew, visitors and RNLI inspections.

“He was able to speak his mind when required and could also steer everyone in the station onto the right course by his example and dedication, thus we all had to admit, begrudgingly at times, that he led the way by lessons learned and experience. This made him undoubtably the best fundraiser the station has known, not just as the ‘Box Collector’ as he must have raised tens of thousands of pounds in that role alone.

“His efforts in the fundraising appeal for what was to be the new Lifeboat Station were an example to many locally, but he had contacts, donors and supporters both nationally and internationally . It still has me puzzled to this day how he reached so many and raised so much for the station.

“Finally I will say this, generally the public and supporters recognise the crew as the ‘Hero’s’ who save lives and risk their own. But Don was a hero to us. Exmouth RNLI and Exmouth and its thousands of visitors will, I am sure, acknowledge Don as the very quiet and unrecognised Hero of Exmouth in his own right. With all that he has done to leave a legacy unknown to many for silently raising the funds that allow the crew to ‘Save Lives at Sea.’

“Rest in Peace Don as your Legacy lives on and will be cherished by many.”

Current Lifeboat Operations Manager, Ian Taylor, said “Don was always the friendly face at the station, welcoming newcomers, and tirelessly working away at the fundraising to keep the station operational. He would be the one you could go to with just about any query you had and he would say ‘leave it with me – I’ll sort it out.’

“Don and Sue, his late partner, were very regularly selling jams and cakes at every opportunity on top of his numerous fundraising activities. He was even getting new collection boxes placed from his sick bed in the last few weeks. They will be best remembered in many of the crews minds and stomachs for the copious quantities of the best home made sausage rolls you could find, and these were donated to many a lifeboat exercise.

“He will be sorely missed by all the crew and all he came into contact within the wider RNLI team, and also the wives, husbands and partners of us all who were given the welcome cheer.

“To the Grandfather of Exmouth Lifeboat Station – Thank you and Rest in Peace.”

Deputy Coxswain and Full Time Exmouth RNLI Mechanic, Andy Stott, said “In my 24 years at station I’ve never come across a person that is more dedicated to the RNLI than Don, over the years he has held many roles from Chair of Fundraising, Box Collector, Deputy Launch Authority and Boathouse Manager.

“Over the last 4 years since I took on the role as station mechanic Don has always been there in the background making sure the station is fully stocked with food, cakes, drinks and his renowned sausage rolls so that when we got back from a shout the crew were looked after.

“Don is going to be missed by so many. Fair winds and following seas my friend, I’m going to miss you.”

Funeral arrangements will be published when known.