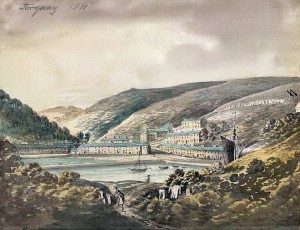 This one’s for all you merry swains and maids of Torquay – a swain, apparently, is a country lad or suitor. 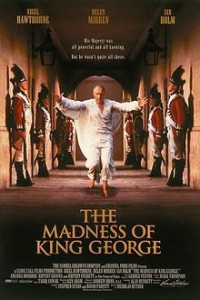 Anyway, back in 1815, the poet TW Booker wrote a poem about Torquay entitled… well… ‘Torquay: A Poem’. He clearly liked it here. 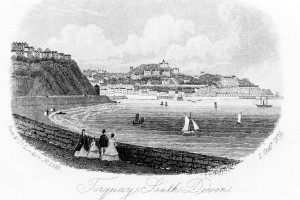 This was a product of Regency England. In 1810 George III was taken seriously ill and declared incapable of ruling because of mental incapacity.  The 1994 film ‘The Madness of King George’ covers the episode.  In response, the Regency Act was passed making his son George Prince Regent able to rule in his place. The Regency then lasted until George III’s death in 1820 when the Regent became King George IV and was able to rule in his own right. Hugh Laurie played George in Blackadder (pictured below), but this shouldn’t be seen as a true representation of the future King!

The Regency era was characterised by the freedom and extravagance of George compared with the ascetic lifestyle of his father. And, in his youth, the Regent represented a world of elegance, extravagant follies and romantic liaisons – this was a “devil-may-care period of low morals and high fashion”. The Regency is consequently associated with a style of architecture, furniture and design and, though the Romantic Movement was well-established by the time the Regency started, the time was rich in literature. It featured the Romantic poets such as Wordsworth, Byron, Coleridge and Shelley, along with the novelist Sir Walter Scott. The works of Jane Austen are inextricably linked to the Regency while the artists Constable and Turner were doing the painting. As all history has a soundtrack, think of Beethoven. 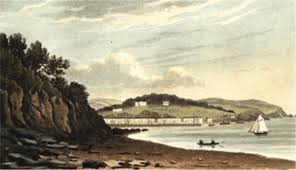 TW Booker’s poem was written in the very early days of our town and isn’t really up there with the great poems of the nineteenth century. However, it does give us a bit of an idea of the optimism that was around at the time and how Torquay was seen by a visitor. A century later the poem was being hailed as having successfully predicted that Torquay would become a prosperous tourist resort, its hills boasting “villas and mansions fair”.

Now, around a further century later, is TW Booker still as prescient? Here’s:

Lo! time shall come, when on yon throng’d parade
Shall groups assemble, swains and many a maid,
And elder dames and sires, in converse gay,
Breathing sweet health fresh-wafted from the bay
And yonder hills all boasting purest air
Shall smile with villas and with mansions fair;
Adorn’d with gardens or with paddocks green
These scatter’d round shall on the heights be seen.
While Commerce trading to a distant world,
Her streamers flying and her sails unfurl’d,
Shall, when the winds awake the waves from sleep,
Spot the bright bosom of the refluent deep,’
Thus sings the muse, — and were her strains divine
Propitious days, Torquay, should hence be thine,
Where Nature not august alone appears,
But, fraught with wealth, her beauteous head she rears.
Behold these rocks in dazzling splendour shine,
Each rock in marble an exhaustless mine!
Here with delight the checker’d fields behold
While Autumn tints the ripening corn with gold ;
Or while the storms of winter howl around,
And not a blooming plant or leaf be found
In other scenes, — in this mild clime the rose
In all its beauty, all its fragrance blows,
Here Venus’ fav’rite tree is smiling seen
Clad in a never-fading vest of green.
What marvel then, that stricken sufferers come
From distant climes thy shores to make their home,
To sojourn here while wintry months pass by
And icy storms abroad terrific fly
In their own country? — for in calmest sway
Does Winter reign around the blest Torquay.