Devon and Cornwall Police have confirmed that one device found this morning has been made safe.

Two suspicious packages were found this morning. The first was found in York Road, near Sidwell Street at 6.55am this morning, it is reported that it was attached to the railings of a school. A second suspect package was found at  King William Street Car Park in Exeter City Centre at 9.15am. 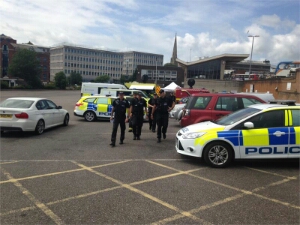 “The device at York Road is expected to be dealt with later this afternoon following further assessment by bomb disposal.

“The scene cordons on both King William Street and York Road are now reduced to 100 metres as a result.

Police have asked the public to avoid the area if at all possible and not to drive into Exeter City Centre.

Investigations into the incident continue and police would ask for any information to 101, quoting log 95 of today, Monday, June 29.