Fire fighters have been battling a major blaze in Walnut Road, Torquay this afternoon.

Fire crews from Torquay, Paignton and Newton Abbot attended the incident at around 3.45pm

The aerial platform attended the fire due to the blaze breaking through the roof. 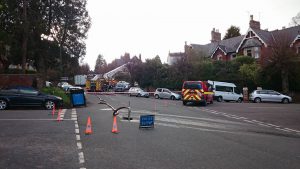 The road was closed by police and remains closed [7.15pm]

It is believed that no people or animals were in the building at the time of the fire.