We very nearly lost the 1922 vampire movie ‘Nosferatu: A Symphony of Horror’ – nearly all copies of this silent German Expressionist horror film were destroyed. Directed by FW Murnau, it starred the striking Max Schreck as the vampire Count Orlok – a character far distant from the suave Dracula we’re used to today. There are also a few Torquay associations which we’ll come to. 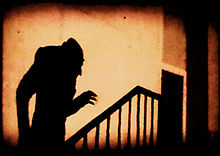 Here’s the plot: Thomas Hutter of the fictitious German city of Wisborg is sent to Transylvania to visit a new client named Count Orlok. While Hutter is eating dinner at Orlok’s castle he accidentally cuts his thumb and the Count tries to suck the blood. Hutter wakes up and notices fresh punctures on his neck and begins to suspect that Orlok is Nosferatu, the “Bird of Death.” He finds the coffin in which Orlok is sleeping, escapes and hurries home. Nosferatu, following in a ship filled with coffins, kills the accompanying sailors. Many deaths then follow in the panic-stricken town which are blamed on the plague. However, our heroine has read a book which claims that the way to defeat evil is for a woman who is pure in heart to distract the vampire through the night. She invites Orlok in and he becomes so engrossed drinking her blood that he forgets about the coming day. When a rooster crows, Orlok vanishes in a puff of smoke as he tries to flee. 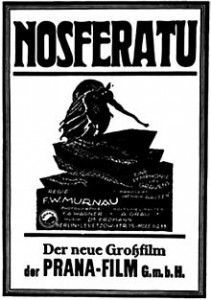 The studio behind Nosferatu, Prana Film, was founded in 1921 by Enrico Dieckmann and Albin Grau. It was named after the Buddhist concept of ‘prana’ – or at least from the version of Buddhism that had been adapted by Torquay visitor Rudolf Steiner to become a part of inter-war German occultism. 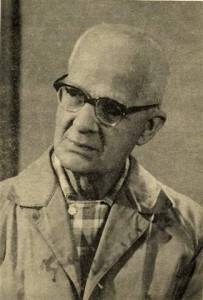 Producer and production designer Grau (pictured above) had the idea to shoot a vampire film after being inspired by his wartime experiences – during the winter of 1916, a Serbian farmer told him that his father was one of the undead. Grau was largely responsible for the look and feel of the film, including the sets, costumes, storyboards and promotional materials. A lifelong student of the occult, working under the magical name of Master Pacitius, Grau inserted occult messages and symbols into ‘Nosferatu’. One example was the contract delivered by Count Orlok which was filled with hermetic and alchemical symbols (pictured below). In 1925 Grau participated in the Weida Conference, an international meeting of occult leaders. Inevitably, Torquay resident Aleister Crowley also attended, lending his unique divisive anarchy to proceedings – Grau sided with Aleister. 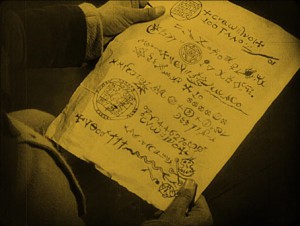 While the intent of Prana Film was to produce occult and supernatural themed movies, this was the only one they made. The company declared bankruptcy after Bram Stoker’s estate, acting for his widow, Florence Stoker, sued for copyright infringement and won. That Stoker took action isn’t surprising as the story of ‘Nosferatu’ is very similar to that of ‘Dracula’. While names and other details were changed – ‘vampire’ becoming ‘Nosferatu’ and ‘Dracula’ being changed to ‘Count Orlok’ – ‘Nosferatu’ retained the core characters of Dracula, such as Jonathan and Mina Harker and the Count. On the other hand, the setting was transferred from England in the 1890s to Germany in 1838 – the exteriors of the film were actually shot on location in northern Slovakia. Further, in contrast to Dracula, Orlok doesn’t create other vampires, but kills his victims. There also isn’t a Van Helsing character, the closest being ‘Professor Bulwer, the Paracelsian’ doctor – a Paracelsian being one who follows Pararcelsus, aspiring to live in harmony with nature. It looks like Bulwer was based on Torquay’s very own Edward Bulwer-Lytton. 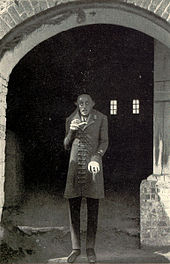 Despite these dissimilarities, the court ordered all existing prints of ‘Nosferatu’ burned. One copy of the film, however, had already been distributed around the world. This print was duplicated over the years, being kept alive by a cult following. 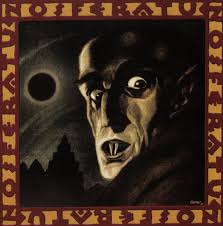 There are many ongoing references to this important movie: in 1979, Werner Herzog’s tribute film ‘Nosferatu the Vampyre’ starred Klaus Kinski; in the 1994 movie, ‘Interview with the Vampire’, Brad Pitt’s character, goes to a cinema in 1922 and watches ‘Nosferatu’; the 2000 film ‘Shadow of the Vampire’ is a fictionalized account of the making of ‘Nosferatu’ starring John Malkovich and Willem Dafoe; and Max Shreck, the character played by Christopher Walken in ‘Batman Returns’, was named in homage to the actor.

Today, ‘Nosferatu’ is regarded as an influential masterpiece of cinema. It was ranked twenty-first in Empire magazine’s ‘The 100 Best Films of World Cinema’ in 2010. It’s nice to know that Torquay residents have influenced horror cinema right from its very beginnings.