An opportunity to slip into the sci-fi world of virtual reality will be on offer at a major Newton Abbot health fair.

The cutting-edge goggle technology is regularly used by Torbay and South Devon NHS Foundation Trust to put doctors, nurses and other frontline healthcare staff in the shoes of patients.

And now members of the public can look through a patient’s virtual eyes on 22 June at The Avenue Church, when South Devon and Torbay Clinical Commissioning Group (CCG) holds its Health Fair and AGM. 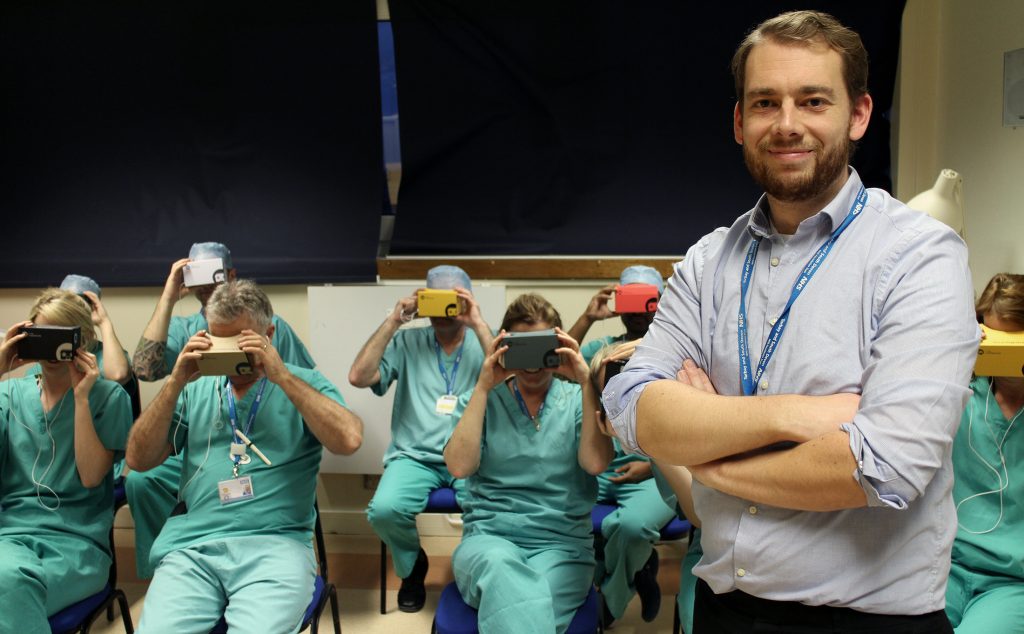 Nick Peres gives clinicians an insight into the virtual world

Nick Peres, who is involved in the Trust’s transtechnology research, said: “Virtual reality is a lot of fun, but it is also very important in the way we are able to train our clinical staff, helping them to see treatments from a patient’s point of view so they can better empathise with patients.”

As well as the 360-degree virtual reality videos on offer, visitors to the health fair will be able to find out about online GP consultations, which aim to speed up people’s ability to get the right treatment they need at the right place.

Pharmacists and GPs will be at the event to give health checks, as well as information or advice on issues such as weight, body mass index, blood pressure and cholesterol checks.

There will also be CCG teams there for self-care, safeguarding, patient experience, primary care and mental health, as well as Community Transport representatives to talk about their work and services.

Dr Nick Roberts, the CCG’s chief clinical officer, said: “We’ve organised a wide-ranging event that will give people a great understanding of the health and care work that is going on in South Devon and Torbay.

“It’ll be a really interesting event, and I look forward to meeting members of the public who have a passion for the NHS and its partner organisations.”

The health fair begins at 10am, followed at 11.30am by the CCG governing body’s annual general meeting (AGM), when people will be able to find out about the organisation’s performance during the past year and its plans for the future.

Anyone wanting to attend the event is asked to email their confirmation to corporate.sdtccg@nhs.net​ or call 01803 652500.

Join Torquay Museum on 12th June for a fun-filled, colourful Pageant to help celebrate its 175th Anniversary, featuring a samba band and amazing creations made by community groups, schools and local a…

Torbay Council has expressed its sadness after today’s announcement of the death of His Royal Highness The Prince Philip, Duke of Edinburgh. The Worshipful the Mayor of Torbay, Councillor Maggi Dougl…

Update: Maureen has been found safe and well. Police have appealed to the public to help them locate a missing 81-year-old woman from Plymouth. Maureen ‘Mo’ Johns was last seen at around 10am on Fri…