On the Saturday afternoon during the Ten Tors event this year, history was made for one of the Dartmoor Rescue teams and in particular one of its stalwart volunteer members. Each year at Okehampton camp the military organisers recognise those organisations and volunteers who have supported the event for 10, 20 and 30 years. This year, as part of this quiet and understated presentation, Dartmoor Search and Rescue Team (Ashburton) and in particular one of their volunteers, Alec Collyer from Shaldon, were recognised for 40 years of continuous support to the Ten Tors event.

Ten Tors, for those who don’t know, is an annual event on Dartmoor which is organised and check-pointed  by the military where 2,400 teenage children aged between 15 and 18 walk 35, 45 or 55 miles over two days and have a wild overnight camp in the middle. It’s a real challenge for the young people as they are unsupported by adults with the best teams training for the 5 months leading up to the event. The role of the four Dartmoor rescue teams is to provide rescue cover should this be required during the event. 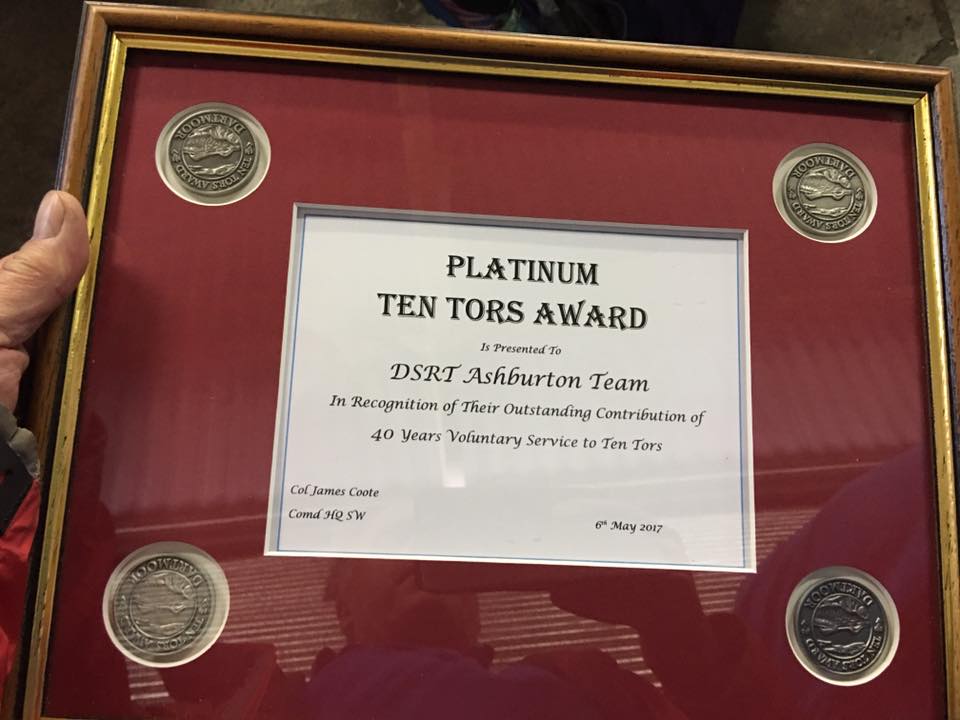 In the 57 year history of the event very few organisations and even fewer individuals have been recognised for 40 years of support and the current volunteers of Dartmoor Search and Rescue Team (Ashburton) are rightly proud of their heritage. The volunteers continue to look forward to their annual support of the event alongside their sister Dartmoor rescue teams and other voluntary organisations. At a recent Dartmoor Search and Rescue Team (Ashburton) Annual General Meeting, the team formally recognised Alec Collyer for this continued support to the team and to the Ten Tors event.

Keith Lambeth the Dartmoor Search and Rescue Team (Ashburton) Team Leader said ‘One of the great privileges of being part of this team is the people you get to meet. Alec’s service to the team in general and ten tors in particular is an inspiration to us all’

Alec Collyer of Dartmoor Search and Rescue Team (Ashburton) said ‘Over the years we’ve seen all possible weathers thrown at us and the participants. From snow to rain lashed gales to baking sunshine. Teams are so much better equipped and trained nowadays, in the “old days” Ten Tors was often the first time some teams had ever seen Dartmoor, those teams had a bit of a shock. I intend to collect a 50 year supporter’s medal’