There’s an intriguing bit of local folklore that still surfaces today. It’s the story that Napoleon fathered a Torbay baby.

First, the facts. After Napoleon came second in the Battle of Waterloo in 1815, the Royal Navy thwarted his planned escape to the United States. He then surrendered to the British after running out of other options. We exiled him to the remote island of Saint Helena in the South Atlantic. When he died in 1821 at the age of 51 there was shock and grief throughout Europe. In 1840, a million people witnessed his remains returning to Paris, where they still reside at Les Invalides. 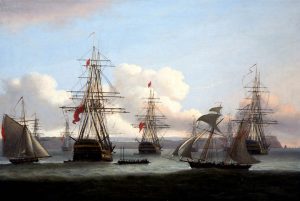 On the way to his exile he was held on the warship HMS Bellerophon, nicknamed Billy Ruffian, in Torbay for two days. Upon his first sight of the Bay the former Emperor has been quoted as exclaiming “Quel Bon Pays” – “what a lovely country”. Napoleon was, of course, seen as the most dangerous man in the world and kept under close guard. Nevertheless, despite efforts at secrecy, many people heard of his presence in the Bay and chartered boats to gaze at the ex-Emperor as he stood on the ship’s deck. There’s a few paintings based on this visit to the Bay and Plymouth on his way to exile.

There is an old story, however, that the ‘Corsican Fiend’ briefly came on shore. Local folklore relates of how he fathered a baby during his short visit while visiting Brixham, Goodrington or Torquay. 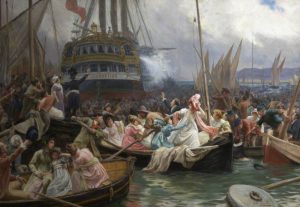 It’s generally accepted, however, that Napoleon Bonaparte never set foot on land in Torbay. Indeed, there’s a range of good arguments for not believing the old legend. He was closely guarded as he had escaped before and many thousands had died in his recapture. No chances would be taken this time – the reason why he was being sent thousands of miles away. There were fears that French loyalists and even English radical Jacobins would attempt to free him.

No one – naval officers, seamen, or local folk – seems to have noticed the most famous man in the world taking the night off and coming ashore. The guards didn’t write in their letters or memoirs that the story was true. Even if they had all been sworn to secrecy, surely someone present would have confided in a loved one or made a death bed announcement? Anyone who knows Torbay taxi drivers today will be aware that they don’t keep to their sworn oath of confidentiality or discretion. Wouldn’t someone have said, “You won’t believe who I had in the back of my rowing boat the other night?”. 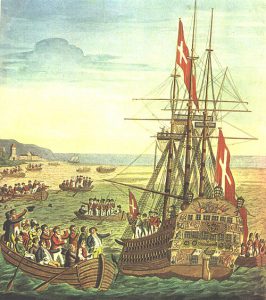 Since 1815 hundreds of books have been written about Boney – including some by those that knew him. None mention him coming ashore. Napoleon himself didn’t seem to have thought it worth mentioning the incident. You would think he might have done since one of his lifelong ambitions was to conquer England. In 1803 he wrote, “All my thoughts are directed towards England. I want only for a favourable wind to plant the Imperial Eagle on the Tower of London.” Though he didn’t have much of a sense of humour, he could have made an off-the-cuff comment along the lines of, “I did actually call in once and you wouldn’t believe what I got up to in Goodrington”. He wasn’t presumably protecting the honour of a Brixham lady either. Napoleon was no proto-feminist. He once stated, “Women are nothing but machines for producing children” and was quite proud of his technique, “A woman laughing is a woman conquered.”

In one way it’s unfortunate that he didn’t call in. It would have been the only time the Emperor set foot in Britain. The Victorians would have seized on the connection and we would have had a statue on Torquay Harbourside. As the Bay was also home to Nelson’s Channel Fleet, we could have had an internationally famous Napoleonic Wars Museum too – how about Oldway as a site?

It’s worth noting that stories of Napoleon visiting England crop up in other parts of the country. In point of fact, it seems as if any Frenchman, or anyone wearing unusual clothing, could be taken as the Emperor himself. In a semi-literate society many people just didn’t know what Napoleon looked like and there are apocryphal tales that the French themselves were seen by some as almost another species. 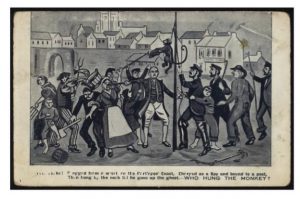 The most familiar of these (possibly fanciful) stories is that of the Hartlepool monkey (pictured above). When a French ship was wrecked off the coast of Hartlepool, the only survivor was a monkey wearing a French uniform to provide amusement for the crew. The locals held an impromptu trial on the beach and, since they had seen neither a monkey nor a Frenchman before, they concluded that the monkey was a French spy and they hanged the unfortunate ship’s mascot. There could perhaps be another explanation. Perhaps they didn’t hang a ‘monkey’ but a small boy or ‘powder-monkey’ employed on warships to prime the canons with gunpowder. Nevertheless, the legend is still used to taunt the residents of Hartlepool – at football matches with local rivals Darlington you can hear the chant, “Who hung the monkey?” The story has now been embraced by locals with the successful mayoral candidate in the 2002 local elections, Stuart Drummond, campaigning dressed as H’Angus the Monkey, using the election slogan “free bananas for schoolchildren”. 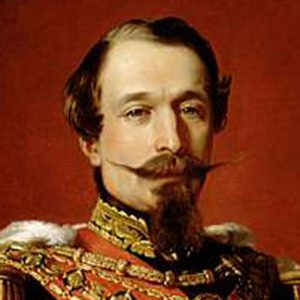 Anyway, back to the Bay. Any visiting foreigner that fathered a child could then have entered local folklore as Napoleon. There is another possible cause for the legend. Though Napoleon Bonaparte didn’t visit Torquay, another deposed Emperor of France called Napoleon did. This was Louis-Napoleon III who stayed at the Imperial Hotel in 1871 (pictured below left). Louis-Napoleon had a reputation with the ladies and could well have left a bundle of Torquay joy behind when his vacation ended. That’s him pictured above – he certainly looks the type… 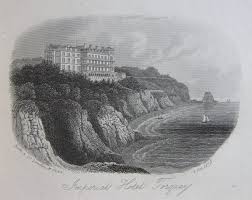 In the war against Prussia – that he foolishly initiated – Louis-Napoleon’s forces were routed at the Battle of Sedan in 1870. That’s him pictured below with the Kaiser saying something like, “It seemed a good idea at the time”.  He was then deposed and the Second Empire came to an end. His wife and son fled to England, where they were offered the use of Camden Place. The deposed Emperor was soon released, and on March 20th 1871, he arrived by train at Chislehurst. It was the same year that he visited Torquay. Louis-Napoleon had long had an association with England and he ended his days in exile in Kent on January 9th 1873 and is buried at St Mary’s Church in Chislehurst. 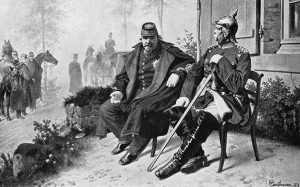 While in England Louis-Napoleon carried on his interest in women. He formed an attachment to young Emily Rowles, whose father owned Camden Place in Chislehurst in the 1830s. He visited her often. Emily remained a supporter of Louis-Napoleon for many years, and she assisted his escape from that French prison in 1846.

Louis-Napoleon was further involved with another English woman, Elizabeth Howard who later gave birth to a son. Though the father of the son wasn’t Napoleon, he did give her property to support the child via a trust whose trustee was Nathaniel Strode. Strode bought Camden Place in 1860 and spent large sums of money transforming it into a French chateau. It was later revealed that Strode had been receiving money from the Emperor.

Louis-Napoleon’s wife, Eugenie, the daughter of the Count of Teba, bore him their only legitimate son, the Prince Imperial, heir to the Empire. 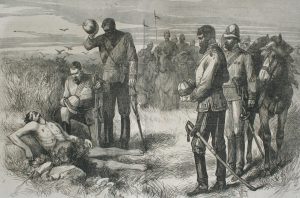 Carrying on the family tradition of making poor military decisions, in 1879 the young Prince Imperial volunteered to serve Queen Victoria and went to fight in the Zulu War. Ambushed by Zulu warriors at the Umbanzi River, Louis was killed at the age of 26 (pictured above is the discovery of his body). Louis had the most advanced firearms available at the time, the Zulus had spears.

We know that Louis-Napoleon had a number of affairs and fathered at least two illegitimate sons – much of his social secretary’s time was apparently spent dealing with his sexual adventures. On the other hand, the illegitimate children of European royalty weren’t in the habit of keeping quiet and there doesn’t appear to be much of a local tradition of anyone claiming to be the son or grandson of the ex-Emperor of France.

What we do know is that Victorian Torquay’s tourist guides imported, embellished and just plain made up stories to impress their wealthy clients. This was almost a bidding race amongst cab drivers to entertain and so make more in tips. 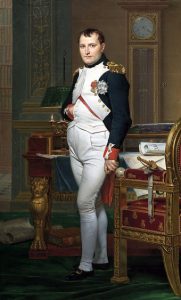 So, was there a local rumour that Napoleon III – carrying his reputation for promiscuity with him – had fathered a local baby? And did Torbay’s opportunistic and inventive tourist industry just get their Napoleons mixed up? We’ll never know.

On the other hand, the original stories may all be true and ‘Le Petit Caporel’ could have left his biological mark on the Bay. Accordingly, if you or anyone else you know is 5 feet 7 inches tall and looks a bit like the chap in this picture above, it may be worth having a DNA test.