Two year old female mandrill Jumba is recovering from a veterinary procedure and has been doing physiotherapy – without even knowing it.

Animal experts from Paignton Zoo in Devon took the Old World monkey for an MRI scan, spinal tap and neurological assessment at Cave Veterinary Specialists, based near Wellington in Somerset, after she became unwell. She is now on the mend, but staff have been introducing crafty physiotherapy sessions to help build up her strength. 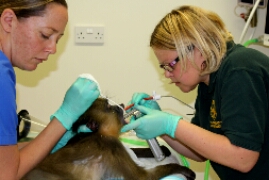 Paignton Zoo vet nurse Celine Campana: “I spoke to my sister, who is a child occupational therapist – she really backed up what we already knew. It’s all about encouraging muscle movement and control. Children are encouraged to pick up and place items accurately. You can’t explain the importance of physiotherapy to a mandrill, so you have to be a bit clever.

“We have used food items to manipulate the movement of her limbs. We’ve placed obstacles in her way to get her to manoeuvre her legs over boxes and logs. We’ve smeared apple and nice treats on high branches which she then had to pull herself up to reach, strengthening her upper arms.

“We moved food so she had to track it with her arms and gave her small treats so she had to use fine motor control to take them. She’s not allowed to cheat and take things in her mouth, although she does try!”

In addition, zoo keepers Cat Steart and Nadia Gould have put food in boxes that she had to manipulate and made vegetable kebab sticks that she had to grasp while she fed. All the while they had to maintain a balance and make sure she was getting enough food.

The mandrill (Mandrillus sphinx) is a primate closely related to the baboon. It comes from Cameroon, Equatorial Guinea, Gabon and the Congo. It lives mainly in tropical rainforests. The species is classified as Vulnerable by conservationists.

Paignton Zoo Veterinary Associate Joanna Reynard explained Jumba’s problem: “She developed weakness in her arms and legs and was struggling with co-ordination. We started her on anti-inflammatories, but when she did not respond quickly we arranged to take her to Cave Veterinary Specialists for an MRI. We were worried she might have a spinal cord abnormality such as a slipped disc.”

Tom Cave at Cave Vet Specialists takes up the story. “Jumba had an MRI and spinal tap which were both normal. She then had an electromyogram to test electrical activity in her nerves and muscles. This showed she had a peripheral neuropathy, which means that messages between her nerves and muscle were not transmitted normally.  She was started on medication and has made great improvements.”

Jumba has now been reintroduced successfully into the mandrill troop. Jo:“This has been a great team effort between Cave Veterinary Specialists, Burgess, who did the MRI scan, our vet team and the keepers. The MRI made all the difference. Cave were great – both vet nurse Emma Bennett and neurologist Lorna Arrol played a big part in Jumba’s recovery – we are very grateful for their help and expertise.” Paignton Zoo Environmental Park is a registered charity. For more information go to www.paigntonzoo.org.uk or ring 0844 474 2222.