The black crowned crane is a species of sub-Saharan swamps and grasslands; it’s the only crane to roost in trees. It is listed as Vulnerable by the IUCN. 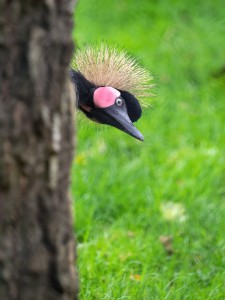 Paignton Zoo is home to five black crowned cranes, including a breeding pair and their three offspring from 2013 and 2014. The youngsters share a paddock with two young grey crowned cranes to help socialise them as they mature. There is a European Stud Book for the species. Paignton Zoo Environmental Park is a registered charity. For more information go to www.paigntonzoo.org.uk or ring 01803 697500.