Police have appealed for information following the discovery of a body in Exeter yesterday, Monday, 21st November.

The body of an unidentified man was discovered at a property in Okehampton Road yesterday afternoon.

Police are working to identify the body and enquiries are underway, police are awaiting the outcome of a forensic post mortem.

A 37 year old local man was arrested this afternoon on suspicion of murder and is being detained at Heavitree Road Police Station.

Police are appealing to the public to establish if anyone has had their black rubbish bin stolen recently from the Exeter area. Anyone who has had their bin stolen, similar to the one pictured, is being asked to contact the police on 101. 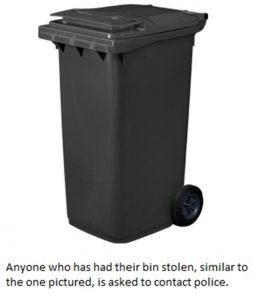 Police are also appealing for witnesses and would like to hear from anyone who saw or heard anything suspicious.

Anyone with information is asked to contact the police on 101 or 101@dc.police.uk quoting log number 416 for the 21st of November.