Detectives in Devon and Cornwall have commissioned innovative 3D printing technology for the first time to help .

Alex Peguero Sosa, 17 was killed while on a night out in Kingsbridge last July after Lee Dent stabbed him in the neck with a beer bottle. Dent was jailed for ‘life’ (to serve a minimum of 22 years) More here: https://wearesouthdevon.com/man-jailed-for-life-for-murder-of-south-devon-teenager/

As part of the trial detectives called upon City College Plymouth to help secure Dent’s conviction by using innovative 3D rapid prototyping technology to create an exact replica of the murder weapon, the beer bottle.

The prosecution wanted Dent to demonstrate how the bottle had been held during the attack but could not take a real beer bottle into the court for safety reasons.

The use of 3D rapid prototyping in this instance was ground-breaking for the region as it was the first time that Devon and Cornwall Police had used this technological process in a court case.

A spokesperson for City College Plymouth said: “When we were approached by a senior detective who was involved with the murder trial, our highly trained staff at the college were able to design and produce the weapon using the latest software. We worked into the evening and over the weekend to make sure the replica weapon was ready for the court demonstration on the Monday morning.”

The process of creating the reproduction murder weapon took over 28 hours, building the bottle slowly layer by layer with the college’s state-of-the-art Cubex 3D printer. 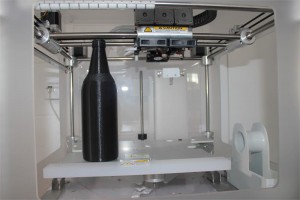 A replica of the murder weapon was created

Detective Inspector Ian Ringrose, from Plymouth’s Major Crime Investigation Team and senior investigating officer in the case, said: “We are very thankful to the team at City College Plymouth. Thanks to the replica of the murder weapon they produced, the prosecution was able to safely ask the defendant to demonstrate how he had held the bottle when he struck the victim and allowed the barrister Simon Laws QC to closely cross examine him on this aspect of his evidence.

“This was the first time we had used this technological approach and the use of it in court helped to fully explain the facts. The prosecution was greatly assisted by the use of the replica bottle created by the college team.”

The specialist machine, which was purchased as part of the refurbishment of the college’s state-of-the-art Engineering Centre, is normally used by engineering students to support their project work. The equipment has previously been used to create prototypes and parts to repair equipment but this was the first time it had been applied to forensic crime solving.