Torbay Coastguard were in action again today, 13th February after a dog went over a cliff near Daddyhole Plain in Torquay.

Coastguard crews has been out earlier in the day after a fisherman broke his leg at Hopes Nose, he was airlifted to a waiting ambulance at Daddyhole Plain. More here: https://wearesouthdevon.com/fisherman-rescued-hopes-nose-torquay/

Coastguard crews were called back to the Daddyhole Plain area at around 5pm after a dog fell near the NCI Tower.

“We were tasked to our second call out today by Maritime and Coastguard Agency. The call was to dog and it’s owner over the cliff near the NCI Tower at Daddyhole Plain. On arrival team members located the dogs owners and assessed the circumstances. The owner was in a safe place and was not putting themselves in danger but did the right thing to call us. We set up a two stake holdfast with Berry Head Coastguard backing us up, our cliff tech went roughly 50m down the cliff and was able to get the dog into our special dog rescue bag. The team safely winched our cliff tech and the dog back to the top, where the dog was reunited with its owners. A bit battered and brusied but in high spirits to see his family.

“We wish the dog a speedy recovery but we can’t share this message enough, please…. please keep your dog on a lead on cliff paths and cliff tops. But this family did the perfect thing and safely spotted the dog and called the Coastguard for assistance. If you are ever in danger or see someone in danger along the coastline, Dial 999 and ask for the Coastguard,” 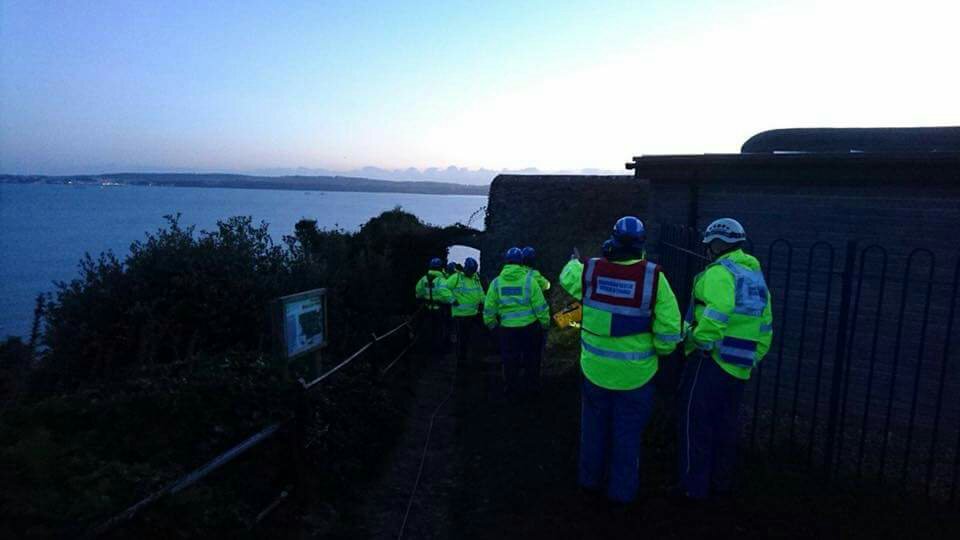