Update: The Fire was extinguished by 11pm. Crews returned to check the situation at 1am.
More here: https://wearesouthdevon.com/update-torquay-grand-hotel-fire/

Fire crews were called to reports of at a hotel in Torquay this evening.

Appliances From Torquay and Paignton were mobilised to the incident at the Grand Hotel just before 10pm.

Smoke could be seen coming from the roof of the hotel on Torbay Road. 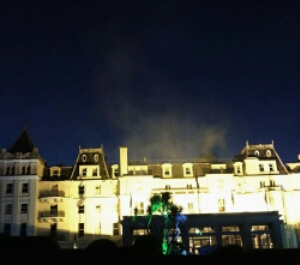 Fire crews remain at the scene of what is thought to have been a chimney fire.