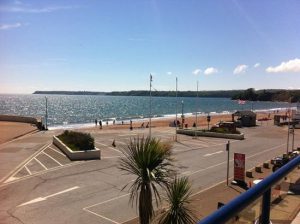 Here at WASD we recently ran an article on the Churston Sasquatch. Now it’s the turn of the Goodrington Sea Serpent.

Sightings of sea serpents have, of course, been reported for hundreds of years, and continue to be claimed today.

And in July 2010 came a photograph showing what appeared to be a long-necked sea creature stalking a shoal of fish 30 yards off Saltern Cove, one of the coves known as Three Beaches just south of Goodrington Sands. The fish were apparently so scared that they beached themselves. Gill Pearce who took the photo initially thought was a turtle but it was pointed out that “the neck of the greenish-brown beast with a reptile-like head was far too long for it to be a turtle”.

The sighting was reported to the Marine Conservation Society where the photo was studied by sea life experts. The MCS reported, “Gill Pearce spotted the creature about 20 metres from the bay at Saltern Cove, near Goodrington. It was reported as a turtle as it had large front flippers and small back flippers and what appeared to be a shell but was also said to have a small head on a thin neck about two-feet long which craned above the surface like a Plesiosaur.” Perhaps actually mentioning extinct dinosaurs wasn’t the best analogy to use as we are about to see.

However, it was pointed out, “No sea turtles do that with their heads and we do not know of similarly described freshwater turtles that grow so big. The lady thought it may have been a turtle – but turtles don’t chase fish. It’s described as being as long as a sea lion with a long neck which floated at the same height in the water all the time. This is not a fake. The problem is the distance and clarity from which the photos were taken. So at the moment it is ‘unidentified’”. 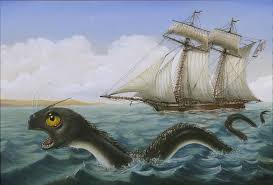 Another eyewitness Paignton’s Graham Oxley, 63, said: “I went down to the beach with my dog and I saw what I thought was a turtle. I saw a black dome which was more rounded than a turtle’s shell and its head kept popping out of the water every five minutes. It seemed to lurk over some weeds in about four foot of water for around half an hour.”

The semi-retired electrician dashed home to get his camera but when he returned the creature was swimming away. “That was when I realised it wasn’t a turtle at all. What I thought was the shell was actually the creature’s back and it seemed to change colour like a chameleon. When it was in the shade it was a black colour and then when it swam off it changed to a greeny-brown. It seemed to camouflage itself. That’s probably why not many people have spotted them. It was standing feeding on the weeds and had its back arched.” Graham helpfully concluded with, “My eyesight is perfect, I don’t drink and I’m not on drugs.” 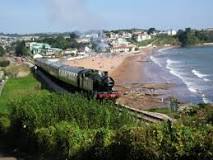 The photos of the Goodrington Sea Serpent can be seen on the Daily Mail site:
http://www.dailymail.co.uk/news/article-1299023/The-new-Nessie-Mystery-sea-creature-spotted-British-coast.html

The sightings did, of course, cause a stir on web sites across the world – some eagerly picking up the ‘Plesiosaur ‘reference. Particularly excited were cryptozoologists who like the idea that entities from folklore and supposedly extinct animals are still out there. The Goodrington beast then joined the list of chryptozoologist Bruce Champagne’s more than 1,200 purported sea serpent sightings. It is worth pointing out, on the other hand,that because it doesn’t follow the boring scientific method, cryptozoology is considered a pseudoscience by those old fuddy-duddies in the academic world. Nevertheless, a range of theories were put forward to identify the Bay’s sightings. Here are some of the suggested candidates in no particular order of rational thinking:

* A salt water crocodile. This one is a bit disturbing as “survival of a direct predatory attack from a saltwater crocodile is unlikely…  the only recommended policy for dealing with saltwater crocodiles is to completely avoid their habitat whenever possible, as they are exceedingly aggressive when encroached upon.”  Between 1971 and 2013, the total number of fatalities reported in Australia alone due to saltwater crocodile attacks was 106. So let’s not spread that particular rumour about just before the holiday season.

* A sperm whale along with calf. We like whales

* The common or garden sea serpent – an American website argues: “What if this is an unknown? How plausible! I think/feel eyewitness accounts are the most credible form of evidence. And why not, history has proved that fact. How awesome!”

* A giant squid. “The colour changes are well known in squid, while the long neck and head could actually be one of the squid’s two longer tentacles. Squid normally only surface when they’re dying, after mating, so if this one wasn’t suffering post-coital tristesse, perhaps it didn’t fare too well against a sperm whale” 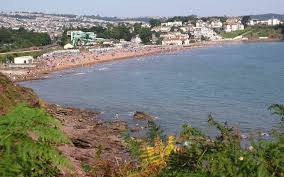 And then someone rational has to come along and spoil it all. Asked if the Goodrington Sea Serpent could have been a rare sighting of the Loch Ness monster, Peter Richardson, Marine Conservation Society’s biodiversity programme manager, replied: “That would not be my official explanation.” 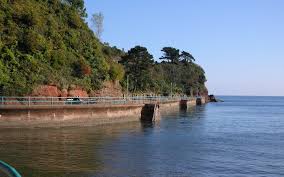 But maybe something is out there and has been for a long time. Codex Boernerianus is a small New Testament book written in one column with 20 lines per page. It’s been dated to to the 9th century and is currently housed at the University of Dresden in Germany. Unfortunately, during the Allied bombing of Dresden in World War II, the manuscript suffered severe water damage and, because Dresden was part of East Germany, the manuscript wasn’t accessible to outsiders during the Cold War. In 2002 it was finally studied and translated by an American professor.

It was most likely written by an Irish scribe and describes a pilgrimage to Rome. The interesting bit to us is the following which suggests what dangers were seen to be out there:

“Prepared to be sent to Rome from the seaside by Torbay. May Jesus of Nazareth, King of the Jews, give it safe conduct and not let the false man bear it away. In the fogs of the bay, amid the waves of the sea. Sea walls and sea whirlwinds, sea monsters and mermaids.”

So keep watching the waves…