From today, 17th July, members of the public can dispose of unwanted bladed items, such as knives, swords and unwanted collectables without fear of prosecution.

There will be collection bins at the following police enquiry offices: Heavitree Road in Exeter; Torquay; Charles Cross and Crownhill in Plymouth; Camborne, St Austell and Bodmin in Cornwall and at Barnstaple in the North and West Devon policing area.

You can find the address of your nearest police enquiry office on the Devon and Cornwall Police website, here: dc.police.uk/PEO

Chief Superintendent David Thorne, based in Plymouth, said: “This amnesty is for any kind of knife or bladed item that could be used as a weapon. If you possess a knife that has no legitimate use in your home, hobby or profession, please use this opportunity to get rid of it, otherwise it is potentially dangerous to you and others.

“There is no reason for anyone to carry a knife in public. Someone carrying a knife is much more likely to get stabbed themselves as situations which involve weapons can quickly get out of control.”

The messages are clear: There is no excuse for carrying a knife, and getting any unwanted ones out of circulation is important in helping to protect our communities, so bin the knife. 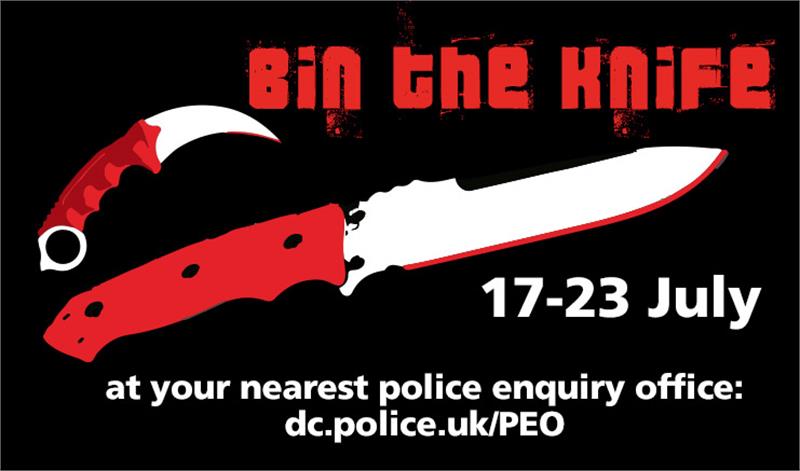 Additional activities include school visits by neighbourhood officers in South Devon, police officers and PCSOs visiting secondary schools and youth clubs in Plymouth to talk about knife crime and, in the Exeter, East and Mid Devon area, metal detecting wands will be used at various licensed premises.

The Exeter, East and Mid Devon team began activities on 14th July so as to include the night-time economy of two weekends. Plymouth teams will start their knife amnesty and activity on 19th July, running until 26th July.