Devon and Cornwall Police have said that two suspect packages found in Exeter earlier have both been made safe.

Two suspicious packages were found this morning. The first was found in York Road, near Sidwell Street at 6.55am this morning, it is reported that it was attached to the railings of a school. A second suspect package was found at  King William Street Car Park in Exeter City Centre at 9.15am.

Following assessment by bomb disposal experts, the devices found on York Road and King William Street have both been made safe.

The cordons on both King William Street and York Road are now being reduced to the immediate scenes of the incidents as a result.

The Police have stated that road closures around the city centre will begin to be lifted shortly, although traffic congestion in the run up to rush hour is expected to take some time to be cleared.

Police have thanked residents for their patience and co-operation throughout today.

“We don’t under estimate how difficult road closures and evacuations can be for local people, but safety of all our communities remains paramount.

“I’d like to thank all of our communities and partner agencies for their role in what has been a professional and proportionate response to today’s incident.”

Rolo, a specialist search dog, has been helping officers with searches in Exeter city centre today. 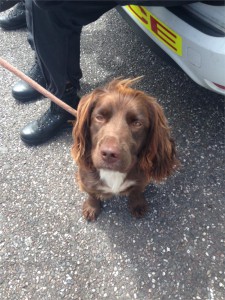 Rolo has been helping officers

Investigations into the incident continue and police would ask for any information to 101, quoting log 95 of today, Monday, June 29.