In the glorious Devon sunshine, a memorial stone has been unveiled in honour of Corporal Theodore Veale, who was awarded a Victoria Cross for his heroic actions during the First World War.

Dartmouth born Cpl Veale was awarded the Victoria Cross for his bravery in the Battle of the Somme on 20 July 1916 when he rescued a stranded soldier. One hundred years to the day, a memorial stone has been laid in his honour at the Royal Avenue Gardens, Dartmouth. 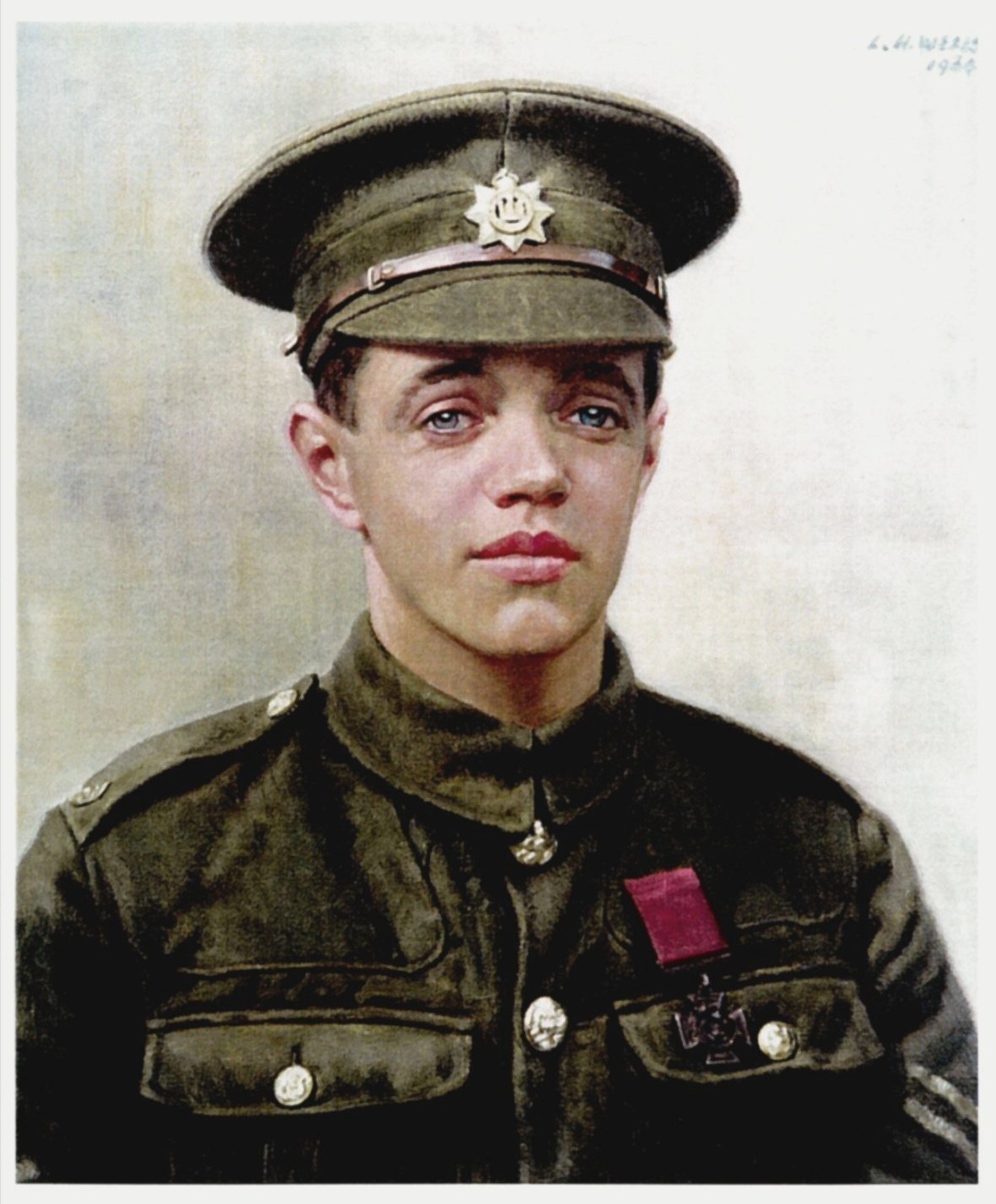 Hosting the unveiling ceremony, Cllr Peter Smerdon, Chairman of South Hams District Council, said: “Today we are gathered to honour the one hundredth anniversary of the award of the Victoria Cross to Corporate Theodore Veale of the 8th Battalion of the Devonshire regiment.

“Born in Dartmouth, he was the first man in the town to volunteer for the army at the outbreak of the war. He won his VC for courage and determination of the highest order whilst rescuing an officer under enemy fire at High Wood, at the height of the Battle of the Somme.”

Cllr Smerdon then invited the Mayor of Dartmouth, Cllr Rob Lyon to speak, Cllr Lyon said it was a great privilege to be celebrating an act heroism of one of Dartmouth’s sons.

“It is inconceivable for many of us to understand the inner strength it requires to take such actions amid the chaos and the mayhem. The VC is the highest award for gallantry and Cpl Theodore Veale without doubt deserves this recognition.”

The stone was blessed by Father Will Hazlewood, and there to unveil the stone were Cpl Veale’s son-in-law John Grindell and Veale’s granddaughter Jennifer Grindell. 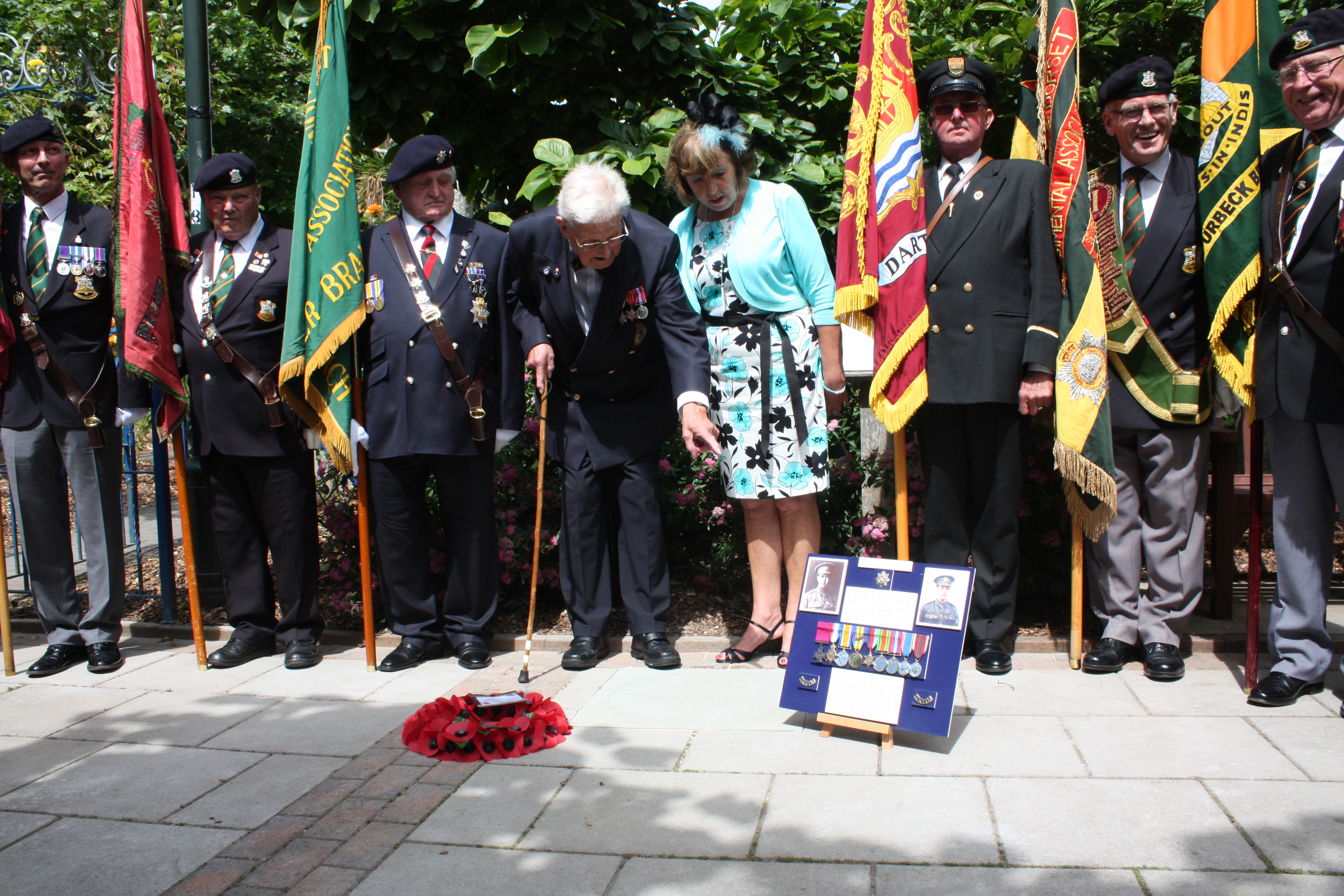 Mr Grindell said: “On behalf of the Veale family, I would just like to say how very proud we are that you have provided this celebration and we are very grateful to see you all here, old and young alike and I see there are one or two Royal Marines here, which pleases me immensely. Have a good day.”

Jennifer Grindell, Cpl Veale’s granddaughter, added: “I feel very proud and privileged to be here today with so many local people and to know that he is in the memories of local residents.”

Nearing the end of the unveiling, Cllr Smerdon read the citation issued at the time the medal was awarded:

“On 20 July 1916, Corporal Veale learned that an officer lay wounded out at the front, and without thought for his own life set out to save him, venturing repeatedly to try to bring him to safety.

“He found the casualty lying within 50 yards of the enemy, returned for assistance and took two volunteers to bring the officer in from under the noses of an enemy patrol.

“Theodore Veale’s actions earned him the Victoria Cross, for most conspicuous bravery – the courage and determination displayed was of the highest order”.

The rescued soldier was Lt Eric Savill, who went onto become the Deputy Ranger at Windsor Great Park. Five magnolia trees were donated to the Royal Avenue Gardens from the Great Park and now stand near the paving stone in the Veale/Savill gardens.

South Hams District Council organised the laying and unveiling of the commemorative paving stone in the gardens, next to the Veale/Savill notice board and blue plaque. 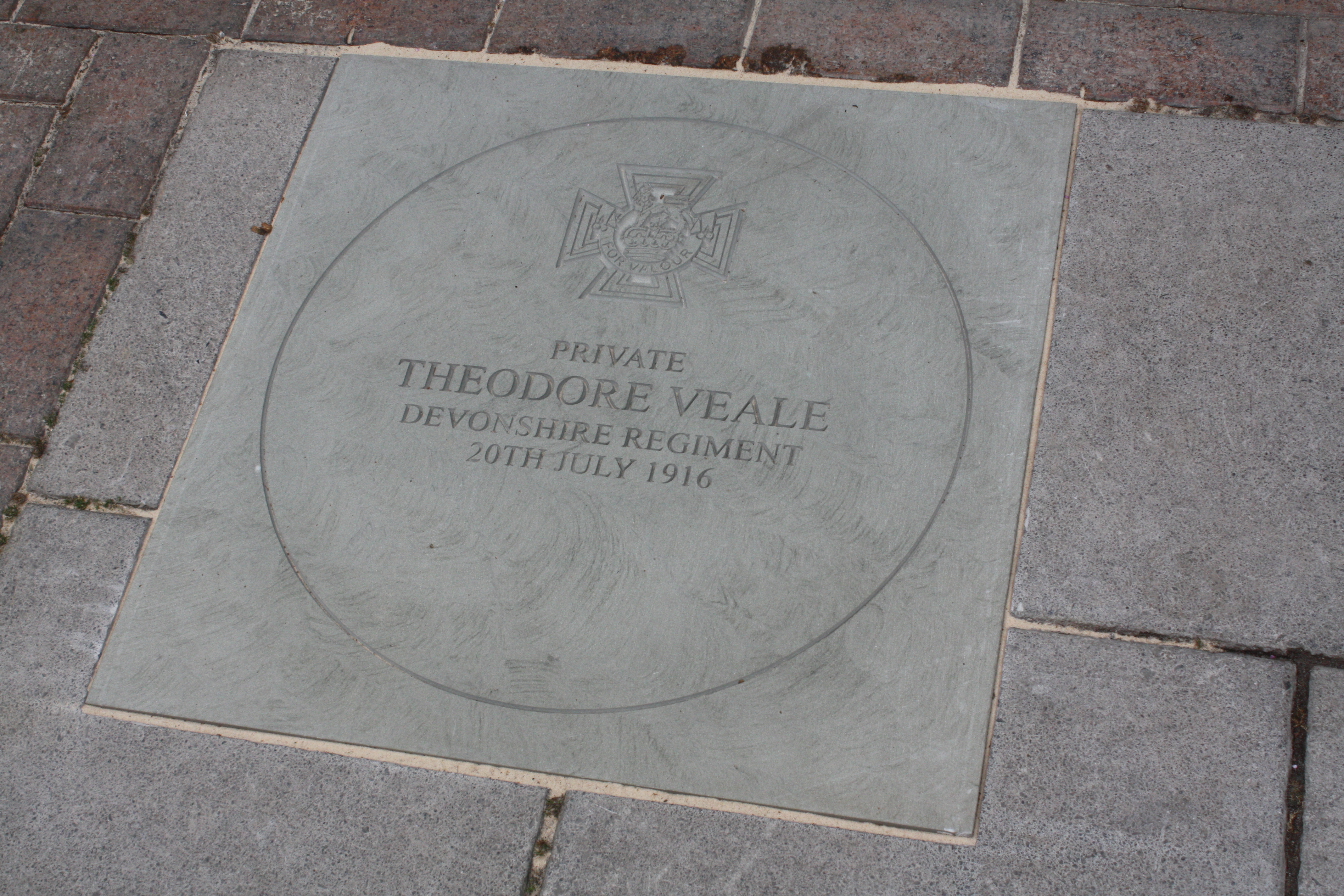 As part of the national campaign, the Department of Communities and Local Government are providing the commemorative paving stones to all towns and villages where recipients of the Victoria Cross were born, to honour their bravery, provide a lasting legacy of local heroes within communities, and enable residents to gain a greater understanding of how their area fitted into the First World War story.