Over 100 cannabis plants were seized this morning (26th February) after a Misuse of Drugs Act warrant was executed at a farm in the Chumleigh.

The warrant stemmed from community intelligence, and officers from Cullompton, Tiverton and Crediton neighbourhood teams along with the Force Support Group and CID. 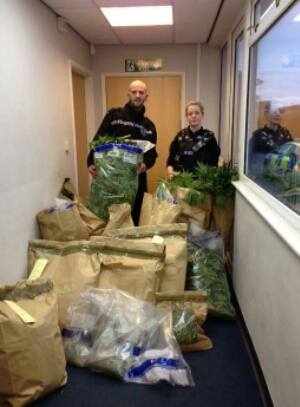 Over 100 plants seized by police

Sergeant Dave MacFadden said: “This is a wonderful result. We were acting directly on community intelligence and we have now seized over a 100 cannabis plants plus other paraphernalia. This is a strong one-team effort, and working directly with the public we have managed a superb result.”

One man is currently helping police with their enquiries and awaits interview.