Kingsbridge Police have appealed for information after a cat lost it’s leg after getting it caught in an illegal ‘Gin’ trap.

Posting on Facebook, the police stated that 2 men had found the distressed cat on the side of the Road near The Mounts in East Allington. The cat was taken to South Moor vets, where she lost her leg due to the crush injuries sustained.

“The cat isn’t micro-chipped and South Moor Vets are keen to find the owners. She is a female cat of about 1-2 yrs. She is a black cat with 3 white feet and a white belly, but most importantly, and most distressingly, she is also pregnant”

The police stated that the pictures of the injuries are too horrendous to post but did post a photo of the trap involved. 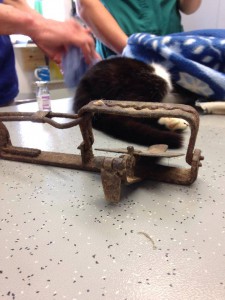 It is illegal to use, set, or own these traps for use. Police are keen to speak with anyone with information on this incident, or any information about similar traps being used in the area.

Police also made a plea for all illegal traps to be disposed of safely and de-commissioned with immediate effect.

The RSPCA is also investigating, but any info can be passed to Police by calling 101