Police have appealed to the public for information after a number of World War II medals were stolen from a property in Teignmouth last week.

Medals and a number of other items, including a laptop and mobile phones were from a property in Bitton Park Road, Teignmouth between 7.40-11am on Friday 20th October.

Detective Sergeant Dave Mills from Newton Abbot CID said: “This is a particularly heartless burglary as the war medals that have been taken are of huge sentimental value to the family. Some of the war medals were framed and mounted, some had ribbons attached to them, and were stolen along with an 18 carat gold ring with a diamond solitaire in a six petal flower design; a 9 carat gold ring with a floral setting of cubic zirconia and sapphires which has the word ‘Mum’ carved inside the bezel; an Acer Chromebook; an Acer laptop; a Nokia C300 and Motorola G mobile phones; a Samsung 7.5” tablet in a purple case.

“The medals were awarded to the victims’ uncle who served in the RAF and her father who was in the Guards, they include the Italy Star; the RAF Long Service and Good Conduct Medal.

“We have released some stock images matching the medals that have been stolen and the victims are desperate to be reunited with them.” 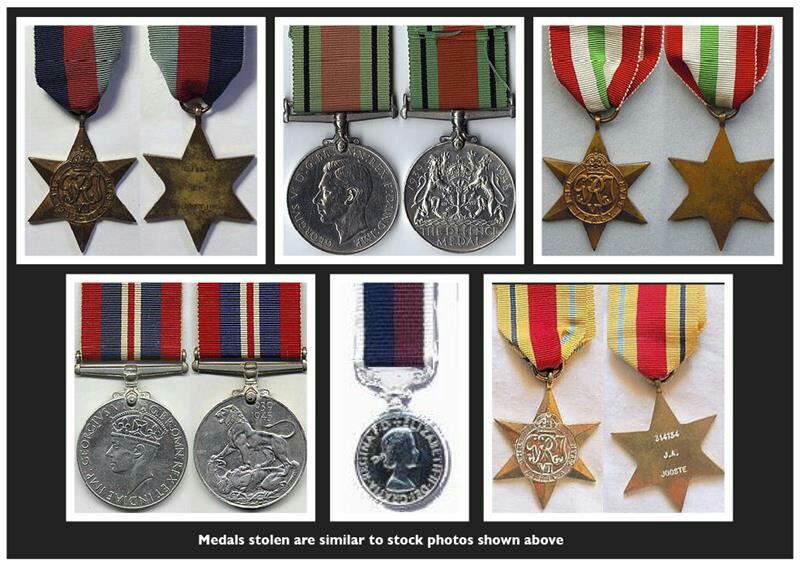 If you know of the whereabouts of these medals, or have any information that can help police solve this crime, please email 101@dc.police.uk quoting crime reference CR/91246/17.
You can also give information anonymously via Crimestoppers on 0800 555 111.