The full extent of the fire damage in Cathedral Green can be seen in drone footage released by police.

The footage was posted on twitter today and gives an aerial view of the buildings affected:

Emergency services remain at the scene and the area is cordoned off. 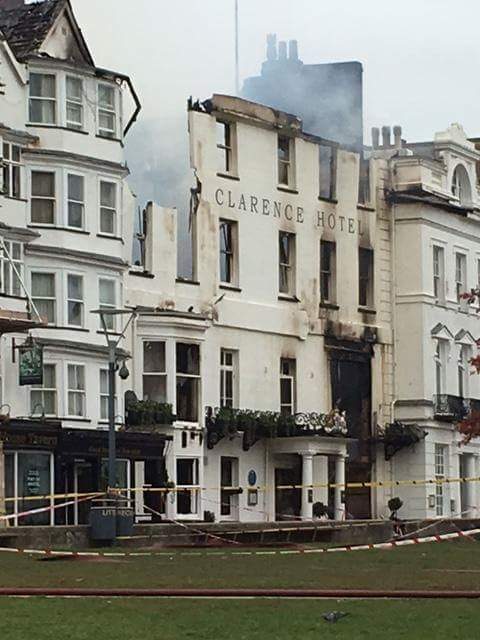 Devon and Cornwall Police has asked the public to appreciate the scale and severity of the fire which has affected buildings on Exeter’s Cathedral Green and to carefully consider their travel plans by car or public transport to Exeter’s city centre.
There will also be disruption to walking routes, and police ask the public to respect the cordons that have been put in place for their safety and to allow the fire service to work efficiently. The public cannot for the time being enter or get closer to the Cathedral Green.
Assistant Chief Constable Paul Netherton said: “The key objective for police is to make sure that members of the public are safe.
“At the same time we need to make sure that Exeter continues to function. We are reviewing the situation regularly to make sure that we are not putting anyone at risk.”
Road closures are in place at the junctions of High Street and South Street, of South Street and the Cathedral Green, on Queen Street at the rear end of Tesco, on North Street at the Iron Bridge end, on Musgrave Road and on Bedford Square at the junction with High Street.
There are further cordons on the cathedral side of Cathedral Green on the approach from Southernhay on the Cathedral Close footpath and also near to the cathedral gardens. Cathedral Green will remain cordoned off and is not accessible to the public while the fire service completes its work.