A porpoise was washed up on a Torquay beach today.

The porpoise was found on Corbyn Head beach in Torquay this afternoon. 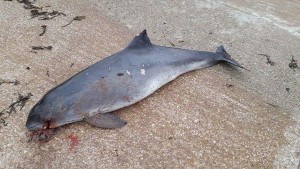 The coastguard were called just after 3pm, they attended and moved the Porpoise ready for it to be collected by the natural history museum. 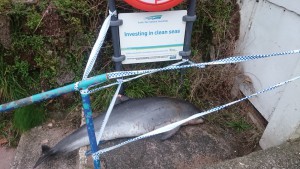 A spokesperson for Torbay Coastguard said on social media:
“We were called to Corbyns Beach after a report of a Porpoise having been washed up on the beach. We moved it above the high water mark and contacted the natural history museum who will be collecting it,”

A golden Labrador was rescued from rocks in Torquay today after he was swept out to sea. The incident happened just after 1pm this afternoon in Babbacombe. Teignmouth Lifeboat rescued the dog an…