The second of two huge smelly flowers is getting ready to bloom at Paignton Zoo.

Titan arum (Amorphophallus titanum) flowers can be up to 3 metres high and 3 metres in circumference and smell like rotting meat. In 2012, Paignton Zoo was the first zoological collection in the UK to have a Titan arum bloom. The gardens team succeeded again in 2015 – but 2017 could be their best year ever for these smelly giants. 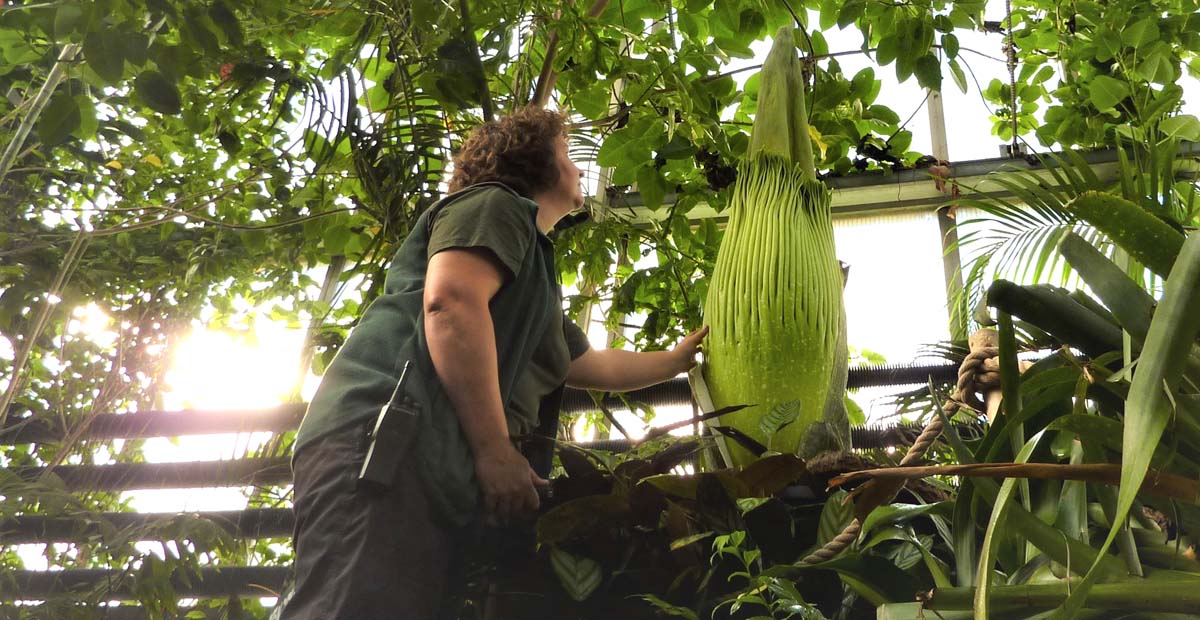 Giles Palmer, Curator of Plants and Gardens at Paignton Zoo, said: “Our first Titan, Tiny Tim, bloomed about a week ago. The second – Olympia – looks to be on course for this week. She’s in Crocodile Swamp opposite one of the crocodile pools. When you stand looking at her, the female saltwater crocodile creeps up behind you, which is a little unnerving!”

Giles: “This one is called Olympia because she last flowered in 2012, during the London Olympics. She’s now 198 centimetres tall. The last time we weighed it, the tuber was 56 kilos – that’s roughly the weight of a teenager!”

Giles added: “It is great for us to be able to talk about horticulture at Paignton Zoo. We are a combined zoological and botanical garden, the plants are as important as the animals. This has been a really good opportunity to remind people of that. The whole gardens team has worked hard on this and should be very proud of the results.”

The plant – from the rainforests of Sumatra and a member of the Arum family – is classed as Vulnerable on the IUCN Red List of Threatened Plants. It has one of the largest flowers in the world; the bloom – correctly, an inflorescence – is green on the outside and bright red inside, with ribbed sides and a frilled edge. Due to its odour – said to be like rotting meat – it’s known as a carrion flower, and has been dubbed corpse flower or corpse plant. It emits the strong smell at night to attract pollinators.