Jane Marchese Robinson’s book ‘Seeking Sanctuary a History of Refugees in Britain’ tells the story of people fleeing persecution and war who have found refuge in Britain. Starting in the sixteenth century with Protestants escaping the savagery of Phillip the second’s troops in the Spanish Netherlands, to modern day refugees from Syria and other contemporary conflicts it looks at that history and the kind of welcome people have received. 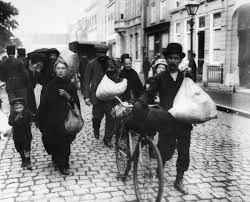 Jane worked for seven years with asylum seekers and refugees in Plymouth and it was during that time she discovered that her grandmother had come to Britain as one of the 250,000 Belgian refugees who fled their country when the German tanks rolled in in 1914. That was long before the World War 1 commemorations and it was a revelation to her. These experiences acted as inspiration for the book.

“There are so many myths about refugees propagated by the media nowadays that I wanted to dispel them and show that for over five centuries refugees had come to this country.” Jane said. 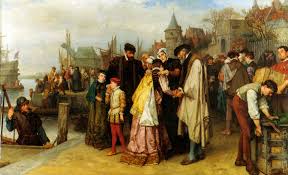 Refugees came to different regions of Britain but many found a home in Devon. Huguenots arrived in Devon and settled in Plymouth, Exeter and Bideford. Some 3000 Portuguese refugees spent the year of 1828 in Plymouth and were the subject of an international incident as they left! The county welcomed the first group of Belgian refugees to leave London; people may know that Agatha Christie based Poirot on a Belgian doctor she worked with in Torquay. Dartington sheltered Jewish refugees and Hungarians were employed at factories in Plymouth. 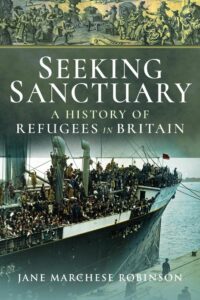