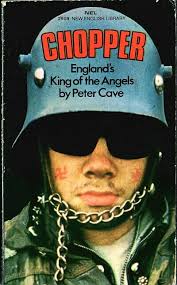 Long ago – way before the internet gave us all unlimited instant access to any book – the young people of Torquay furtively passed around a variety of cheap paperback novels. Young teenagers from Audley Park, Westlands and the Grammars shared paperbacks that featured copious amounts of violence and sex. Often published by the New English Library, these now mostly forgotten novels were aimed at a young readership and are now referred to collectively as ‘Youthsploitation’. 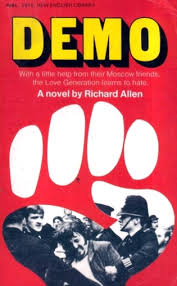 It was during the early 1970s that Britain saw the publication of this spate of cheap, lurid novels based around the sensationalised portrayal of subcultures such as skinheads and motorcycle gangs. Overall, the genre mirrored broader media beliefs that 1970s Britain was in a never ending series of social and political crises. While many of the books had a worldview that was authoritarian and chauvinistic, they also featured a defiant rebellion against traditional authority which naturally attracted young people. 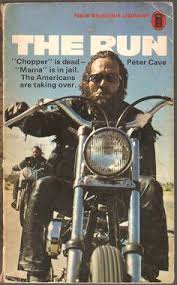 Though we didn’t know it at the time, one of the most popular authors was Torquay’s very own Peter Cave, who started out as a printing apprentice on the Herald Express. Peter’s Hell’s Angels novels include ‘Chopper’ (1971) ‘Mama’ (1972) and ‘The Run’ (1972). Indeed, some of the books featured local Torquay landmarks. The blurb for Chopper reads: “This is the story of Chopper, of his bike, his pills, his girls and his violent bid for gang leadership. Author Peter Cave tells like never before how a greaser grows up to become a fallen Angel.” 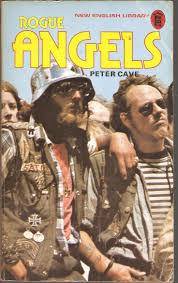 Bikers were always popular. Some of the best reads came from the typewriter of Mick Norman whose’ Last Heroes Hell’s Angels’’ series was set in the dystopian near-future of the 1980s: ‘Angels From Hell’, ‘Angel Challenge’, ‘Guardian Angels’ and ‘Angels On My Mind’. These presented a vision of a nightmare near-future. From the back cover of ‘Angels from Hell’:

“England, turn of the millennium. Government repression has driven the Hell’s Angels underground; yet they still exist. The final outlaws. From their hide-out in the mountains of Snowdonia, Gerry Vinson leads his chapter, the Last Heroes into battle. Apart from police and government manipulation, the Angels must contend with The Ghouls – a satin-jacketed yet sadistic rival chapter – as well as unscrupulous rock promoters who need them as cannon fodder against the emerging breed of razor-wielding teen rock fans and, above all, the deadly new threat from gangs of strutting, scented, ultra-violent mod-skinhead hybrids: the skulls.” 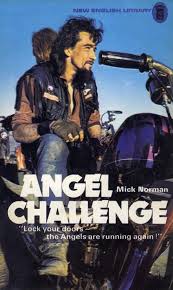 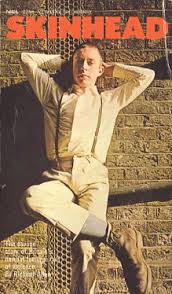 Not all Youthsploitation novels were based on the mean streets of Britain, however. The prolific British writer George G Gilman wrote almost 200 books, mostly pulp novels in the crime and, bizarrely, Western genres. Real name Terry Harknett, Gilman wrote under an array of pseudonyms, but his most well-loved books were described by his US publisher as, “The Most Violent Westerns in Print”. Influenced by spaghetti westerns, his blood-spattered anti-hero Edge was the most popular. Beginning with ‘Edge: The Loner’ (1972) Gilman wrote, amongst others, 61 Edge, 49 Steele and 27 Apache Western novels, all extremely violent and often featuring a cruel humour. 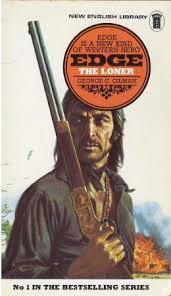 While these novels were all a young teenager could want back in the early 1970s, they haven’t aged well. For decades they were out of print and acquired a sort of mystique, but now thay can be picked up cheaply on your Kindle. But, they were a product of their time and should be seen as a piece of historical fiction about the tribal British gang culture of the time. Mods, rockers, bikers, skinheads, football hooligans and other youth cults were battling it out on our streets – including Torquay – and the books did reflect some sort of reality. Yet, when read today the violence and sex now come across as repetitive and clichéd – the exception being possibly the Mick Norman books.

Those booted and leather-clad anti-heroes now just seem nasty, often-racist, thugs and morons with a love for violence just for the sake of it. So, if you are of a certain age, perhaps it’s best to not to download these relics from 45 years ago… just rely on those fond memories of handing dog-eared copies around in Torquay’s school corridors.