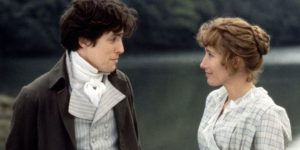 Two completely different British movies were released in the same week early in 1996. One was based on Scottish heroin addicts and called Trainspotting and the other was a costume drama, based on the 1811 novel by Jane Austen called Sense and Sensibility.

We’re focussing on Sense and Sensibility as it was partly filmed in South Devon – although some of us would most recognise the setting of the Danny Boyle movie rather than the genteel world of early nineteenth century Devon.

Emma Thompson wrote the script for this British-American period drama which was directed by Ang Lee. The story follows the Dashwood sisters (Emma Thompson and Kate Winslet), members of a wealthy English family of landed gentry, as they deal with circumstances of sudden destitution. They are forced to seek financial security through marriage. Hugh Grant and Alan Rickman play their respective suitors. 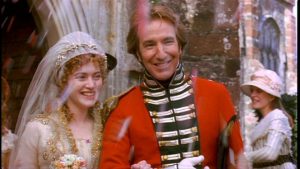 It was a commercial success which garnered overwhelmingly positive reviews upon release, including three awards and eleven nominations at the 1995 British Academy Film Awards. It earned seven Academy Awards nominations, including for Best Picture and Best Actress. Thompson received the Best Adapted Screenplay, becoming the only person to have won Academy Awards for both acting and screenwriting. Sense and Sensibility contributed to a resurgence in popularity for Austen’s works, and has led to many more productions in similar genres. 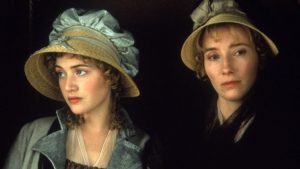 Here’s the part we played in South Devon. The production of Sense and Sensibility was scheduled for fifty-eight days, though this was eventually extended to sixty-five. Filming commenced in mid-April 1995 at a number of locations, beginning with Saltram House (standing in for Norland Park). The second location was the Grade I Flete House in the South Hams which stood in for part of Mrs. Jennings’ London estate. 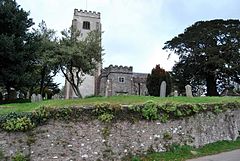 Early May featured the “exquisite” village church in Berry Pomeroy (pictured right) for the final wedding scene. Lee shot around fifty takes, with the actors soaked under rain machines. This led to Winslet collapsing from hypothermia and later she contracted phlebitis in her leg, developed a limp, and sprained her wrist after falling down a staircase.

Other scenes were shot at Compton Castle (Mr Willoughby’s estate and pictured left) between the Bay and Newton Abbot.

From May to July, production took place at a number of other National Trust estates and stately homes further afield: Trafalgar House, Wilton House and Mompesson House in Wiltshire; sixteenth-century Montacute House in Somerset; and at the National Maritime Museum in Greenwich.

Here’s the trailer for Sense and Sensibility: