Around four thousand years ago the inhabitants of Torbay died out- and we don’t know why.

This near extinction took place over several hundred years but we know from DNA evidence that they did disappear. These lost locals were the Neolithic communities who were responsible for megalithic monuments such as Stonehenge and Torbay’s oldest building, the Chambered Tomb or Passage Grave at Broadsands. In their place came migrations of people from continental Europe.

Dated to 3768-3641 BC, the Broadsands tomb is older than Stonehenge and is representative of the final part of the Stone Age, the Neolithic, which spanned from around 4000BC to 2,500BC. The peoples of the Neolithic Revolution had adopted agriculture and settled down in one place. To make room for new farmland, mass deforestation took place while new types of stone tools began to be produced. 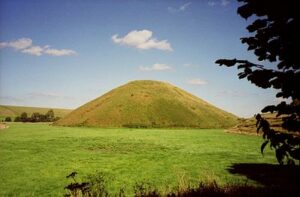 The Neolithic also saw the construction of these monuments in the landscape, the earliest being chambered tombs, to later be replaced by stone circles and other landmarks – the greatest of which are at Stonehenge, Avebury and the immense Silbury Hill (pictured above). These megaliths seem to be linked with the new ways that people thought, in their religion, and how they ordered their society.

The Broadsands tomb is a stone mound megalithic chamber which had a single entrance passage. Discovered in 1956 by local archaeologist Guy Belleville, the tomb was excavated by C Ralegh Radford in 1958. Archaeologists found three first inhumations of two adults and one infant alongside Neolithic pottery – an adult male aged at least forty, a young adult male who was at least 5ft 6ins tall, and the infant. There may have been more as the remains had later been cleared to the sides of the chamber and trodden into the floor. It was when two human thighbones still embedded in soil were dated that we found that the inhumations took place between 3768 and 3641 BC.

It appeared as if several ritual fires had been lit before a new pavement was put in position, possibly a ritual cleansing prior to reusing the chamber. Then there was a later inhumation of a young male below the age of twenty alongside later Neolithic pottery.

Oddly, evidence from stable isotope analysis showed that the occupants of the tomb had a diet almost wholly based on land based food. Very little fish was being eaten, despite these folk living so close to the sea – Guy Belleville also found worked flints, arrowheads and parts of polished flint axes about half a mile from the tomb. There appears to be no other definite examples of a Passage Tomb in the southwest of England and they are unusual in Britain, though they are common in Portugal and Brittany, suggesting some kind of link with the continent. 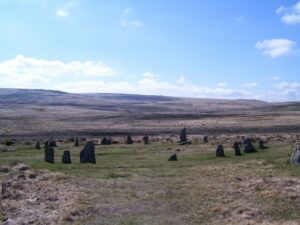 The entire population of Britain in the early Neolithic may have been only around 100,000 people and not much is left, particularly in Torbay which has largely been built on.

But we aren’t the decedents of those original Neolithic builders. As with the rest of Britain, our Neolithic locals were almost completely replaced by newcomers about 4,500 years ago. Bringing Bronze Age technology to Britain was a migration by a people from the Beaker culture which spread across Europe and can be tracked through its distinctive pottery. The Beaker people replaced 90% of the British gene pool in a few hundred years. They would have looked differently to our tomb builders who had olive-brown skin, dark hair and brown eyes. In comparison, the Beaker folk had lighter skin, blue eyes and blonde hair.

We don’t know what killed off the original Torbay folk. It may be that the incoming Beaker people had better technologies, social organisation, or ways of feeding themselves.

There is also the possibility that our early farmers were already facing population collapse through climate change around 5,500 years ago. After a population peak at around 3,500 or 3,600 BC, Britain’s population declines to a low level until about 2,500 BC and then increases. Around 2,500 BC the population is very low and that’s when the Beaker population seems to come in.

his downturn in the climate, alongside an over-exploitation of land by Neolithic farmers, may have caused a decline in food production. It could be that the Beaker folk arrived to find that much of the original population had already disappeared – they just occupied an empty land. Intriguingly, Stonehenge’s great stones were put in place immediately before the Beaker people arrived. 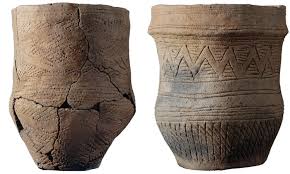 It doesn’t look as though this was a violent invasion. The Beakers came in small groups and over a long period of centuries. Also, evidence shows that interpersonal violence was higher in Neolithic Britain than it was in the Beaker period.
On the other hand, there is a suggestion that some Beaker folk carried plague with them. Perhaps our original locals had not been in contact with this pathogen before and had little resistance to it. 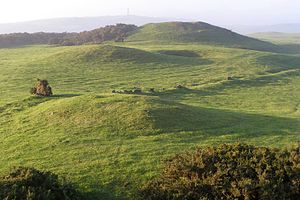 The new Beaker arrivals had a very different way of living. They didn’t construct massive stone monuments needing the work of hundreds of people. They favoured more modest round earth barrows, burying their dead with bell-shaped pots, copper daggers, arrowheads, stone wrist guards and perforated buttons. Many of these barrows can still be seen on Dartmoor and, presumably, Torbay would have featured others on our hill tops that have now been lost.

It’s also proposed that it was the Beaker people that introduced the Celtic language to Britain – such a massive population change would most likely have been accompanied by new forms of communication.

So we still don’t know why the original Torbay folk vanished; just that new locals came in and have been here ever since.