On 2 January 1873, ‘The Wallace’, a ship from Boston, was taking a cargo of petroleum to Antwerp and returning to New Orleans, when winds drove her into the Bay.

A fire was discovered on board and the ship was grounded 500 yards from where Princess Pier is now. This was a spectacular sight and the Torbay Road thronged with crowds of onlookers. 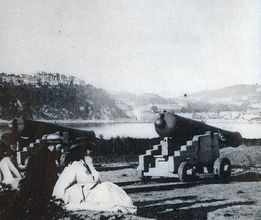 Fearful that the ship would drift and that fire would spread to the town, the Volunteers moved their gun from Corbyn Head (pictured above) and made a hole in the sea wall ready to sink her. 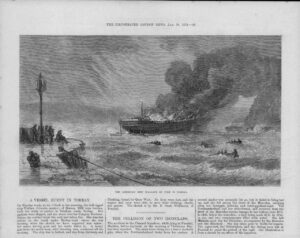 By the 7th the Wallace had burned down to its copper sheathing and was completely lost. However, Torquay, being a tourist town, made many souvenir articles from pieces of ‘The Wallace’s ‘wreck. It would be interesting to see if any are still out there?