Between Brixham and Kingswear is the wonderfully-named tiny hamlet of Boohay. This just means the ‘curved way or track’

What we’re really interested in here is Boohay’s original name, and specifically if it can tell us about Torbay in what used to be called the Dark Ages. This was the time between 400 and 800AD, after Rome had pulled out of Britain, a period of frequent warfare and the virtual disappearance of urban life. It’s not fashionable now to use the term, but for years we were very aware that we knew so little about what actually happened. The problem was that no-one much was writing anything down, so we had to rely on a variety of sources and a bit of guess work.

And that’s where place-names come in.

The scholar Anthony Poulton-Smith records that Boohay was Bogheweye in 1330; and Bowhay in 1542. However, in 1200 Boohay was known as Liddlewigeston; and it was Ledwycheton in 1242. The intriguing part of this is that the name is related to Letavia which is the Latin name for Brittany, and the Gaulish personal name Litavicos- ‘the settler from Brittany’.

The Dark Ages were also known as the Age of Migrations because, all over Europe, folk were on the move, and we were very much involved in those great resettlements of people. After a Roman occupation of about 400 years, it was around the year 410 the Anglo-Saxon settlement of Britain began and the land was gradually taken over by invaders from northern Europe. 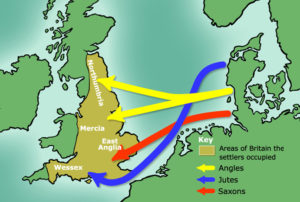 From the mid-fifth to early seventh centuries this process changed the language and culture of most of what became England; from Romano-British to Germanic. These Germanic-speakers eventually developed a common cultural identity as Anglo-Saxons, and established kingdoms in the south and east of Britain, later followed by the rest of modern England.
Yet, it took a long time for Anglo Saxon raids westwards, beginning about 660, to end with a final conquest of Devon by Wessex under King Aethelstan. Certainly, the far South West remained ‘Celtic’ for much longer, Torbay at the time being part of the land of the Dumnonii Britons.

Nevertheless, the far west did fall – in 927 the Anglo-Saxon King Aethelstan expelled what he called “that filthy race” of Britons from Exeter. And it was Aethelstan (924–939) who fixed the boundary between the English and Cornish peoples at the east bank of the River Tamar.

So what happened to the Dumnonii Celtic Britons after their defeat? 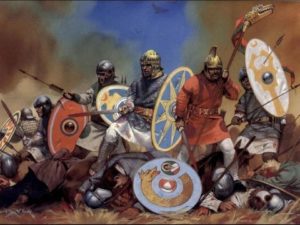 We know that some left Devon and Cornwall altogether. In the 5th and 6th centuries, after the fall of the Roman Empire, it seems that many Britons fled the Saxon invasion and moved to western Armorica in what we now know as France. The area they settled came to be called Lesser or Little Britain, or Brittany which means ‘Britons land’. Later petty kingdoms were known by the names of the French counties that succeeded them. Hence, we have the county of ‘Domnonee’ from Devon’s immigrants.

In Torbay itself, it looks like we may have evidence, not just of displacement and occupation but of survival and coexistence in local place names. 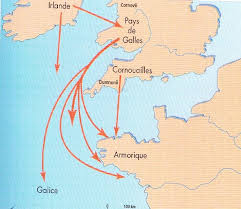 Formerly written ‘Peyton’, ‘Payngton’, and ‘Paington’, Paignton seems to be derived from ‘Paega’ which is an Anglo-Saxon personal name, with ‘ton’ a settlement. Paignton, therefore, appears to be a new Anglo-Saxon community – ‘Paega’s settlement’.

On the other hand, it is thought that the name ‘Brixham’ comes from Brioc’s farm. ‘Brioc’ was an old English or Brythonic Celtic personal name and ‘ham’ is derived from Old English.

So, is Paignton originally Anglo-Saxon and Brixham originally Celtic? Such coexistence is supported by old records that show that the Celtic language was still being spoken in the South Hams in the Middle Ages.

And we still keep finding evidence that sheds more light on that so-called Dark Age.

It was originally thought that the Anglo-Saxons had invaded and either killed all the ‘Celts’ or forced them to flee to Cornwall or Brittany. We now believe that the Dumnonii outlasted the Roman period and continued until at least the seventh century. By then they were largely Christians. Evidence of the conversion of the Bay’s scattered settlements may be seen in the name of Preston, ‘preosta tun’ the priest’s farm – possibly a mission station. 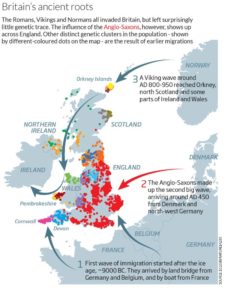 However, in 2015 groundbreaking research found that, remarkably, some Devon folk still retain a Celtic presence in our DNA – 1500 years after the Anglo-Saxon invasion. It looks like the Dumnonii Britons of Torbay survived the invasion.

In a UK wide genetic test it was discovered that there are separate genetic groups in Cornwall and Devon to the rest of Southern England, suggesting that the Anglo-Saxon migration into Devon was limited rather than a mass movement of exterminating Saxons.

So the original Britons seem to have gone ‘underground’. And they’re still out there in Brixham, Paignton and Torquay…

And during those Dark Ages perhaps folk just got on far better than we expected, and this may even have allowed for some cross-channel movement. What the naming of Boohay may suggest, therefore, is that at least one ‘French’ Celt – ‘the settler from Brittany’ – may have decided to make his home in the Bay. Or he may have decided to return to his homeland after first fleeing to safety and then realising that those incoming Saxons weren’t that bad after all.