Devon was once a land of giants. Or it was according to the historian Geoffrey of Monmouth’s ‘Historia regum Britanniae’ (The History of the Kings of Britain), written around 1136. Geoffrey chronicled the lives of British kings over the course of two thousand years, up to the coming of the Anglo-Saxons in the 7th century.

Some of what follows, however, may not be historically accurate- we are into the territory of myth and legend.

The Historia states that, “The island of Britain derives its name from Brutus, a Roman consul who conquered Spain”. It also relates that – in the medieval tradition of tracing people back to ancient or Biblical ancestors – before the foundation of Rome, Brutus was the grandson of the hero Aeneas.

Following Roman sources such as Livy and Virgil, the Historia tells us Aeneas settled in Italy after the Trojan War- the conflict with the wooden horse. His grandson accidentally killed his father with an arrow and so was banished from Italy. After a long wander through the Mediterranean and through Gaul, he founded the city of Tours.

Then, following the advice of the oracle Diana, the Trojans travelled to an island in the Western Seas possessed by Giants, which he named after himself- he called it Britain.

He first came ashore in South Devon and famously pronounced, “Here I stand and here I rest, and this good town shall be called Totnes”. The Brutus Stone in Fore Street is still there to commemorate the event and it remains a town custom that royal proclamations should be announced on the stone by the mayor. 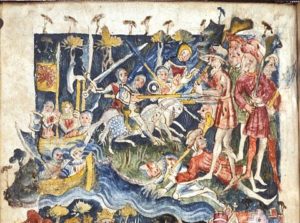 Of course, the original inhabitants of South Devon didn’t want to share the land and the Historia records that twenty giants attacked the Trojan settlement and caused great slaughter. The Trojans then rallied and killed all the giants, except for “one detestable monster named Gogmagog, in stature twelve cubits, and of such prodigious strength that at one shake he pulled up an oak as if it had been a hazel wand” – a cubit is around 18 inches, so we’re looking at an 18 feet tall original Devonian. 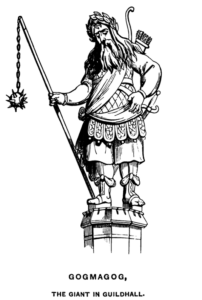 Gogmagog was captured so that the Trojan warrior Corineus could wrestle with him. During the struggle the giant breaks three of Corineus’s ribs, but our hero picks up the giant and carries him to the top of a high rock, from which he throws Gogmagog down into the sea. The place where he fell was then known as ‘Gogmagog’s Leap’- we don’t know where this is but a high cliff near to Totnes seems likely. 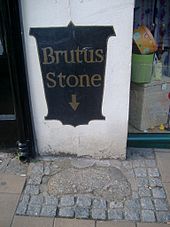 Corineus was subsequently, “given Cornwall to govern, where there were more giants than in any other province.” This place was named ‘Cornwall’ after him.

However, London also has a Stone of Brutus which has been a symbol of the City for at least 900 years. This similarly refers to the Trojan founder of London. In this version of the legend Brutus sailed up the Thames and fought the giants, led by Gog and Magog, who he found there. The city he established was called ‘Troia Newydd’ (New Troy) which later became ‘Trinovantum’. Brutus then put his palace on the site where the Guildhall is today- he further placed a temple in honour of Diana, the goddess who had guided him, on the hill where St Paul’s now is.

It has been suggested that London’s Stone of Brutus is the altar piece from that temple. Brutus is further supposed to have been buried at the other sacred hill site, now known as Tower Hill and there are statues of Gog and Magog at the Guildhall. The image below shows the giants in a London parade. 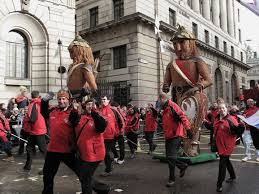 Incidentally, the two giants used to be a feature of the Torquay townscape. The Falcon Inn on Abbey Road next to Central Cinema – later the Town House and still to be identified by the large carved falcon on the roof – had two large statues outside during the early twentieth century- pictured at the beginning of this article. These statues used to be connected with a clock that was situated at Paignton’s Redclyffe Towers between 1875 and 1882. Before that they adorned the home of Sir John Bennett of Cheapside, London. They are of Gog and Magog.