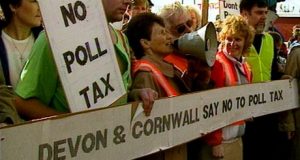 March 17 1990 saw the largest demonstration that Torbay had ever seen – 5,000 people from across the Bay gathered on Paignton Green. While this protest was entirely peaceful, a few weeks later vicious rioting broke out in London, the culmination of a series of violent protests against the introduction of a new form of taxation.

This was the Community Charge, also known as the Poll Tax, a system of local taxation introduced in early 1990. It was a flat rate tax on every adult, and replaced the system of rates which was based on the estimated price of a house. Many people thought this was unfair as they believed that it shifted the tax burden from the rich to the poor. Examples of perceived unfairness in the new system included millionaires in Kensington mansions having to pay similar amounts to elderly widows in social housing. It was also very difficult to collect with the shared house market meaning even landlords often didn’t know who was living in their properties. Accordingly local councils struggled to find out who was living where and when. 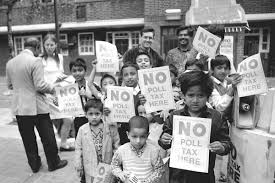 Councils had to chase the large numbers of defaulters, many of whom were taking part in organised resistance to the charge. From the beginning local anti-poll tax organisations encouraged non-payers not to register, to clog up the courts by contesting council attempts to gain liability orders, and to fail to attend court hearings for non-compliance. Local councils found they just couldn’t collect the tax. Consequently, even more people refused to pay – up to 30% of former ratepayers in some areas. Local councils tried to respond with enforcement measures, but these were largely ineffective. Courts were picketed and town halls across the country saw demonstrations – with some turning violent. 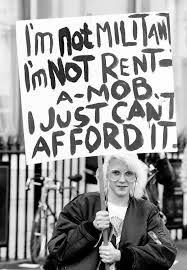 Torbay was one of those areas where resistance was significant – largely as the Poll Tax was the highest in the West Country while local incomes were amongst the lowest.

An indication of the strength of local feeling against the Poll Tax in Torbay came about in early 1990 when an anonymous group of local radicals issued a leaflet. A local community activist remembers: “We produced 50 copies of a leaflet called ‘Smashing the Poll Tax in Torbay’. It gave instructions on how to avoid paying the Tax, how to beat the bailiffs, how to drag out court appearances… That sort of thing. We really thought that half a dozen Punks in Ellacombe would be interested. We left the leaflet in phone boxes and pubs. A week later people would come up to us and say ‘Have you seen this?’ The leaflet was being copied all over the Bay. We even heard that it was being illicitly copied by Council staff on Council photocopiers and given to their family members!” 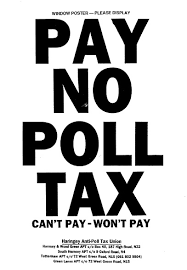 By February 2,000 locals had refused to pay.

And still the Torbay protest escalated. On February 10 there was a Young Conservatives Conference at the English Riviera Centre. Six “young mums” said they were going to demonstrate and, to their surprise, 100 demonstrators turned up. Poll Tax protester Julie Thomas said: “We didn’t think our demonstration would snowball as it has”. When the Prime Minister, Margaret Thatcher, arrived to address the conference she was greeted with booing and chants of “Maggie out! Maggie out!” as she entered the building. This sort of thing just didn’t happen in the Bay and the police were caught by surprise. The protesters were not convinced by a meeting with Torbay’s Conservative MP Rupert Allason.

Anti Poll Tax posters and graffiti then became a common sight across the Bay while activists with spray cans joined the campaign and contributed their own slogans – in one incident Thatcher Avenue became “Snatcher Avenue”. 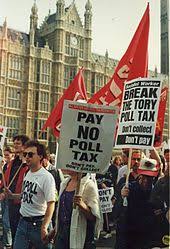 Continuing the pattern that the protests were being led by women, in mid-February a group of what the local media called “housewives” formed the ‘Axe the Poll Tax’ organisation and set up a petition and began to plan a demonstration.

On the day the Poll Tax was introduced, the Herald ran a front page headline, “Poll Tax Anger Erupts: Town Hall Under Siege.” It continued, “Ripped up Poll Tax demands have been hurled at Town Hall staff and telephone operators have been subjected to abuse as Torbay’s fury over the £395 bill grew today.” 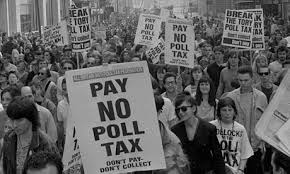 The main local focus of opposition to the Poll Tax was a demonstration planned for March 17. It was called the ‘Axe the Tax Rally’ and began with feeder marches from across The Bay. The Torquay March, for example, set off with 250 demonstrators from Kings Drive with “hundreds of passing driver hooting their horns in support”. They carried 11,500 signatures on a petition gathered in Torquay alone.

Initially, the rally had been planned for Palace Avenue when only a few hundred had been expected. Yet, as the campaign gathered more and more support it was relocated to Paignton Green, though even the most optimistic organiser admitted they weren’t  prepared for the eventual turnout on the day. This was the largest demonstration Torbay had ever seen – 5,000 people “ranging from grannies to babes in arms” crowded Paignton Green to hear a range of speakers denouncing the new tax. The Police Superintendant in charge of the security operations admitted he was struck by how the demonstrators were “just ordinary people”. Remarkably, alongside the demonstration, Torbay campaigners had gathered a petition of 35,000 signatures, around a third of our total population.

After the Rally resistance to the Poll Tax continued across the Bay with hundreds refusing to pay. Non-collection increased and the Government paid a political price across Britain: thousands of Conservative Councillors lost their seats as did MPs in subsequent elections. In Torbay Conservative Rupert Allason MP (pictured above) was replaced by Liberal Democrat Adrian Sanders (pictured below) and several of the ‘Axe the Tax’ organisers went on to become Lib Dem Councillors. 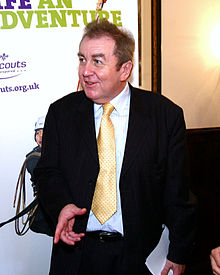 Meanwhile, across the country more direct and often violent resistance was taking place – the worst rioting taking place in London:

Though there were certainly other factors contributing  to the downfall of Prime Minister Margaret Thatcher,  forced out of office by her own party in November 1990, the imposition of a hugely unpopular  local tax was surely one of the main causes. The much hated Poll Tax was finally replaced by the Council Tax in 1993.