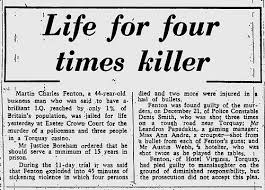 For 12 months in 1973-74 Torquay had one of the highest murder rates in Britain. This was due to two serious outbreaks of violence which claimed the lives of eight people. We’ve already mentioned the second of these incidents – the murder-suicide at Roebuck House. The first shocking killings are the subject of this article.

On December 21st 1973 four people were shot dead by a local businessman in Torquay.

The killings began when Martin Charles Fenton was stopped in Rosehill Road in the Warberries by 44-year-old Police Constable Dennis Smith. The officer had become suspicious of the way that Fenton was driving his Ford Granada. Dennis Smith was shot three times, twice at point-blank range.

Fenton then abandoned his own car and left in the officer’s Panda car. Forty minutes later the gunman entered the Carlton Casino, near Torquay harbourside, where he was recognised as a regular punter and known as Marty. Customer Michael Bentley from Paignton seems to have been one of the first of the Casino’s clients to see Fenton. He said that he thought a man entering the club with two guns was, “some sort of clown”. He later recalled, “It didn’t sound like a gun. It sounded like some kind of air pistol.”

When Leondros Papadakis, the casino’s manager, went to challenge Fenton, he was shot twice. Local hotelier Austin Webb, who was playing at one of the tables, was also shot twice, one of the bullets piercing his heart. Ann André, a croupier, then approached Fenton saying, “Stop it, Martin. Don’t be silly. Don’t, Martin, don’t!” She too was shot twice. Michael Bentley said that Fenton shot Anne Andre after she pleaded with him to quiet down. When she fell to the floor, Fenton shot her again.

Also on duty was 28-year-old croupier Linda Caola, who lived in the Terrace with her husband, a fellow casino worker. She later told the court she thought her husband was going to die, “My husband dived beneath a table when I saw Marty come towards where he was. As he approached I saw my husband stand up. He had the gun pointing at him and he said, ‘Don’t shoot, Marty’. My husband said, ‘We have just got married’. And I heard two loud clicks. I expected to see my husband fall. Unbelievably, he didn’t. I don’t know what happened next.” She said that after the shooting ended she heard Fenton say, “Marty fixed it then”, or “It’s fixed then”. 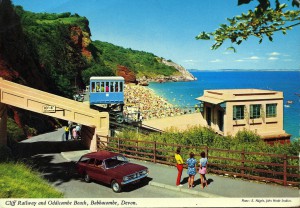 44-year-old Paul King was working on the doors of the casino that night. He said he saw Fenton leave the casino and walk across the road to his car. “He looked straight at me. I thought he was going to shoot. He nodded two or three times with a gun pointed straight at me”. But Fenton got in his car and drove off.

Incidentally, Paul King (1931- 2010) was one of Torquay’s characters. Known as the Torquay Tornado, he was a one-time contender for the British welterweight title and a well-known face on the Bay’s nightclub scene. Besides being a professional boxer, Scots-born Paul was a publican for the Crown and Sceptre in St Marychurch, and the Little Albert. He also set up the Welcome Club with singer Ruby Murray.

In 45 minutes, Dennis Smith, Leondros Papadakis, Austin Webb and Ann André had been murdered. Two more people had been injured, while Tony Caola had escaped because Fenton’s gun jammed.

At the end of the attack Fenton drove off in a van. After an 11 mile and forty minute pursuit he was arrested. When officers pulled the killer from the vehicle they found he had stabbed himself in the stomach. He was taken to hospital.

Six months later Martin Charles Fenton appeared at Exeter Crown Court charged with murder. The gunman was described as a local businessman with three children. It was later claimed that Fenton had a very high IQ reached by only 1% of Britain’s’ population.

During the 11 day trial Fenton was said by Sir Peter Rawlinson QC, prosecuting, to have gone to the casino in search of a man with whom he was having a fierce feud. This was the casino’s owner, who fled through an emergency exit when Fenton arrived with a gun in each hand. He had thrust one of his guns into a doorman’s stomach demanding, “Where’s the Boss?”

‘The Boss’ was casino owner and businessman John Tsigarides who, it was accepted, was Fenton’s intended victim. Indeed, both before and after the eventual court case it was stated that Fenton had a bitter feud with John Tsigarides. The actual cause of the hostility was never explicitly stated though Fenton was supposed to have been, “driven to fury by gambling losses”. There are some clues, however, to the background to the killings.

The first is about what the Club was like. During his early career, the now well-known Chef Jacques Marchal was a croupier and he remembered the Carlton Club, “There was a new casino starting up in Torquay. It was upmarket and they wanted a little of the French suaveness, so I spent a whole summer training all the staff: ‘faites vos jeux’ (‘place your bets’) and all the rest. But there was something about the ambience of the place I did not like. I was not comfortable with it, so I didn’t stay on after that. It sounds corny, but I did not mind taking money off people who could afford it. I did not like taking money off those who could not. I’d see, say, a taxi driver coming in with his fares and I’d want to say to him ‘go home with your money, you have no chance of winning’.”

Who was running the Carlton is also of interest. Ten months after the killing Torquay magistrates banned gambling at the Carlton Casino. They refused to renew John Tsigarides’ gaming licence after police claimed that customers had been cheated. The licensee – they said – was not a “fit and proper” person to be the holder of the gaming licence. Tsigarides appealed the decision but any chance that this may have succeeded disappeared when the Carlton’s owner was further accused of allowing illegal gaming activities on his premises. The Gaming Board also investigated Tsigarides for allegedly granting credit to Fenton – it was suggested that this contributed to later tragic events. Yet, we hadn’t heard the last of John Tsigarides. In 1975 he admitted to, “inciting an associate to suggest that a potential witness should give false evidence or not give evidence”. He was subsequently convicted of conspiracy to pervert the course of justice and attempting to pervert the course of justice. Tsigarides received three concurrent two-year prison sentences.

The Carlton Casino killings alerted the authorities to the dangers of gambling and the police started taking a great deal of notice of how casinos were being run. By 1975 there were just 130 licensed casinos in the whole of the UK. That year the police issued 108 cautions and initiated 82 prosecutions with 56 warrants being issued to the industry.

Returning to Fenton himself, it took just 45 minutes for the killer’s plea of diminished responsibility to be rejected by the jury. Martin Charles Fenton was jailed for life. He died in prison in 1996.

Torquay was a very different place in the 1960s and 70s. It seemed more affluent and self-confident and was the summer home to the stars of stage and screen. Indeed, Tom Fort’s new travel guide to the south coast ‘Channel Shore’ notes that Torquay still has the highest opinion of itself of all the tourist towns. He could be right. Even our place names are imported from the metropolis – such as Pimlico and Belgravia. We have always modelled ourselves on faraway places, so having a French Riviera-style casino was somehow natural. Perhaps we emulated city life in other ways…