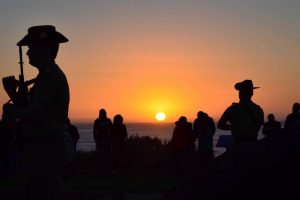 More than 131,000 Allied and Turkish troops died in the Gallipoli campaign, one of the bloodiest battles of World War One, including 11,400 Anzac (Australian and New Zealand Army Corps) and 25,000 British soldiers. That specific battle played its role in the creation of the identity of both Australia and New Zealand and is still commemorated today. Here’s a short video of the ANZAC role in the Great War:

Torquay played a special part in supporting the campaigns of the ANZACs and in the return of our New Zealand allies at the end of the War. The New Zealand contingent of the Australian and New Zealand Army Corps (the ANZACs) had come to Torquay in 1917 – when deciding where to base the troops, Weston-Super-Mare and Weymouth were considered. Yet, as soon as commanding officer General Richardson saw Torquay, he said: “This is New Zealand. It will suit our men down to the ground.”

The New Zealanders (pictured above in Torquay in 1918) had a camp in the water meadows in Lower Cockington Valley. They used a lean-to single-storey wooden pub with a rear wall made of thick cob – this was at the bottom of Bewhay Lane, just past the Lutyens-designed Drum. Many other contemporary sources commented on the presence of the Diggers in local pubs and other venues – such as the YMCA at Maycliff in St Lukes Rd. They also recovered from their wounds in Torquay’s hospitals, such as the one at the Town Hall (pictured below) 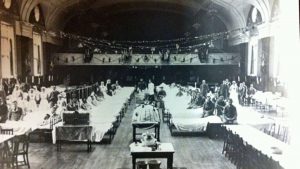 At the end of the war, between 40,000 and 50,000 men passed through the New Zealand Discharge Depot in St Marychurch. Many were directly repatriated from Torquay – between 1917 and 1919, 29,000 New Zealanders left from Haldon Pier. 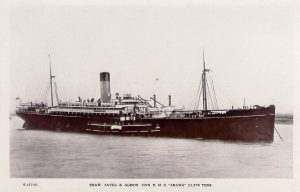 On October 10 1919, for example, “huge crowds” watched as 694 passengers sailed away, including “… a number of armless and legless men for whom special provision was made on the RMS Arawa” (pictured above). The passengers included about 30 wives and it was noted that, “a great many (Anzacs) had married local women”.

But, of course, many perished from battle or disease. 18,050 New Zealanders died and almost 50,000 were wounded. We began by mentioning Gallipoli. In 1915, New Zealand soldiers had formed part of that Allied expedition that set out to capture the Gallipoli Peninsula. What had been planned as a bold strike to knock Turkey out of the war quickly became a stalemate, and the campaign dragged on for eight months.

At the end of 1915, the Allied forces were evacuated after both sides had suffered heavy casualties and endured great hardships. At Gallipoli New Zealand lost 2,721 men. News of the landing at Gallipoli made a profound impact on New Zealanders at home. Though the campaign may have been a military defeat, the Gallipoli landings meant the beginning of something else – a feeling that New Zealand was a distinct nation.

The day of the first landing, April 25 quickly became the day on which they remembered the sacrifice of those who had died. Anzac Day remains one of the most important national occasions of both Australia and New Zealand. 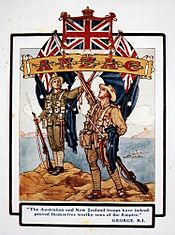 One of the first services to commemorate Anzac Day was held on April 25, 1919, in Belgrave Church on Belgrave Road. 1,000 ANZAC officers and men with their wives were present. Captain McLean, their padre, said: “They honoured that day not only those who lay on the inhospitable slopes of Anzac, but also those who slept beneath the tawny sands of Egypt, amongst the mountains of the Caucasus, beneath the waters of the Great Deep, under the fronded palms of Samoa, or below the sacred soil of Palestine.” Up at Torquay Cemetery lie the graves of some of those New Zealanders who didn’t make it home (pictured below). 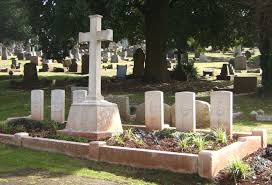 This remarkable 1919 Pathe News clip shows Torquay’s Mayor bidding farewell to the last batch of married New Zealand soldiers leaving the Bay after the First World War – some of them with “a little ‘Digger’.”