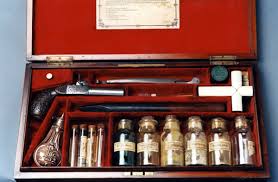 If you’ve taken on the profession of Fearless Vampire Killer, what’s the first thing you’re going to need?

Of course, it’s a vampire killing kit. These can now be bought at auction or on the internet, often for thousands of pounds.  What isn’t absolutely clear is if these kits are actually real antiques, designed to fend off the undead. Or, are they  novelty items or just modern fakes? 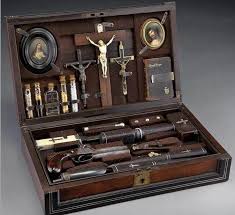 It’s been claimed that at least some of the kits precede the current enthusiasm for vampires and were produced in the 19th century. And they’re not even particularly rare – the Ripley’s Museums of Oddities, for example, have 30 of them, 26 of which are currently on display in eight of their museums. They usually contain, as can be expected, a crucifix, stakes, holy water and a pistol. 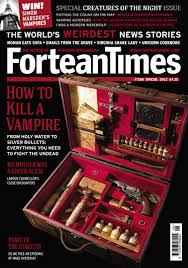 The theory was that the original vampire killing kits were aimed at travellers to Eastern Europe in the early 20th century. This would have followed the book and theatre productions of Bram Stoker’s ‘Dracula’. Yet, most evidence now points to an American or western European origin at some time during the twentieth century.  On inspection, most have turned out to be compilations of historical artefacts that found their way into the antiques market during the 1970s or 1980s. So, rather than being a long accepted self-protection precaution, the first printed reference to the existence of the kits seems to be in the October 1989 issue of ‘Guns & Ammo’ magazine where one was on sale at an American gun show. 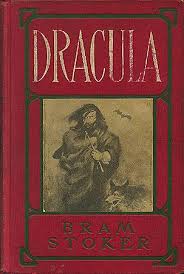 When Delaware’s Winterthur Museum had one kit analysed the results found that the paper labels in the kit were of twentieth century origin which  had been artificially aged. Furthermore, the ‘silver bullets’ contained were actually pewter. Indeed, the inclusion of silver bullets to kill vampires doesn’t even make sense – silver, as any genuine supernatural slaughterer  would know, is only truly effective against that other pest, the werewolf! 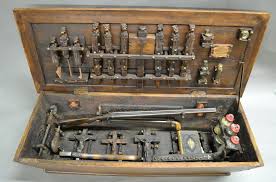 Some of the early-to-mid 19th century vampire killing kits on the modern market are attributed to a Professor Ernst Blomberg and the ‘Liege gunmaker’ Nicholas Plomdeur.

Yet, rather than being the genuine article, responsibility for the creation of Ernst Blomberg has been claimed by Torquay’s Michael de Winter. The opportunistic Michael came into possession of some  poor quality antique firearms – he was an antique dealer and would often acquire bits and pieces that had little value in themselves. Putting them all together as Vampire Killing kits to cash in on the current popularity of the Hammer movies was therefore an astute move.   In 2004 Michael stated that he started marketing his kits in the 1970s, and that others then copied him. 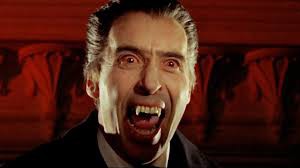 Michael tells us, “The whole VAMPIRE KILLING KIT myth is purely the result of my very fertile imagination and I produced ‘The Original’ in 1972. Nicolas Plomdeu,r the Gunsmith in Liege, and Professor Ernst Blomberg are not and have never been real people. I still have an original copy of the label from the box and am astounded to learn how my joke has caused so much interest and ‘FAKERY’.”

Other vampire ‘experts’ have, on the other hand, dismissed Michael’s story. One kit owner claims he bought his at an auction in 1969 – that was 3 years before Michael was supposed to have invented the artefact. Also, despite Michael’s claim that he invented Ernst Blomberg and Nicolas Plomdeur, there actually was a nineteenth century professor and Belgian gun maker with those names.

Of course, this could all be a disinformation exercise by the vampires themselves in an  attempt to stop us paying thousands of pounds for an essential piece of protection. This clever ruse by the blood suckers would then leave us all effectively defenceless when they come a calling…