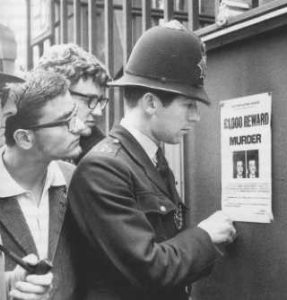 “These murders are the most heinous crime to have been committed in this country for a generation or more”, Justice Glyn-Jones 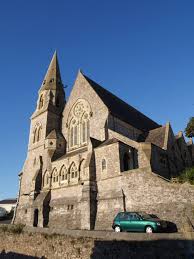 Inside St Luke’s Church in Torquay’s Warren Road there’s a modest wall plaque which reads, “In Loving memory of Detective Sergeant Christopher Head of the Metropolitan Police killed while on duty 12th August 1966”.

Christopher was a choirboy and Server at St Luke’s before he joined the Police. On 12th August 1966 Christopher was on patrol in the police car F11Q near Wormwood Scrubs prison. Along with Christopher (pictured below on the right), aged 30, there was 25-year-old Temporary Detective Constable David S Bertram Wombwell (centre) – they were both members of the Criminal Investigation Department (CID) based at Shepherd’s Bush police station in F Division. Their driver was Police Constable Geoffrey Roger Fox (left) , aged 41, a beat constable. All three officers were in plain clothes. 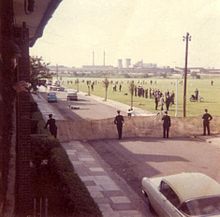 At about 3:15 pm the officers spotted a battered blue Standard Vanguard estate van parked in the street with three men sitting inside it. Since escapes were sometimes attempted from the prison, the officers decided to question the occupants. It’s possible that PC Fox recognised the van’s driver, Jack Witney, as a known criminal. The vehicle also had no tax disc. 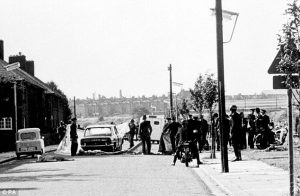 Christopher and DC Wombwell got out of their car and walked over to the van, where they questioned Witney about the lack of a tax disc. His front seat passenger, Harry Roberts, produced a Luger pistol and shot DC Wombwell through the left eye, killing him instantly. Christopher ran back towards his car, but Roberts chased and, after first missing, shot him in the head. John Duddy, the back seat passenger, also got out, armed with a .38 Webley Service Revolver, ran over to the car and shot PC Fox three times through the window as he tried to reverse towards him and Roberts, who also fired several shots. As he died, Fox’s foot pressed down on the accelerator and the car lurched forward over Christopher’s body, who was already dying of his wounds. These killings became known as the Shepherd’s Bush murders, or the Massacre of Braybrook Street.

Duddy and Roberts got back into the van and Witney then drove away. However, a passer-by had written down the registration plate. Witney, the van’s owner, was arrested at his home six hours after the shootings. Following a tip-off, the van was discovered the next day in a lock-up garage rented by Witney under a railway arch in Vauxhall. It contained some spent .38 cartridges and equipment that could be used for stealing cars. He confessed on 14 August, and named his accomplices. 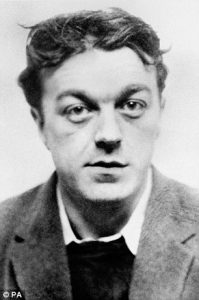 Duddy had fled to his native Glasgow, but was arrested on 17 August using information obtained from his brother. Roberts (pictured right) hid out in Epping Forest using his military training to avoid police capture for three months. He was finally tracked down on 15 November. 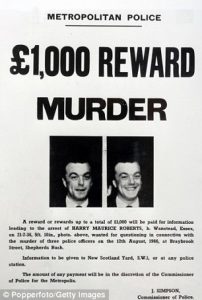 Six hundred Metropolitan Police officers lined the route of the three victims’ funeral procession in Shepherd’s Bush. A memorial service in Westminster Abbey was attended by Prime Minister Harold Wilson, Leader of the Opposition Edward Heath and many other dignitaries, as well as thousands of police officers from all over the country (pictured below right). More than a thousand members of the public stood in mourning outside the Abbey. Public sympathy for the families of the victims resulted in the establishment of the Police Dependants’ Trust to assist the welfare of families of British police officers who have died in the line of duty. Holiday camp owner Billy Butlin donated £250,000 and the Trust soon raised more than £1 million. 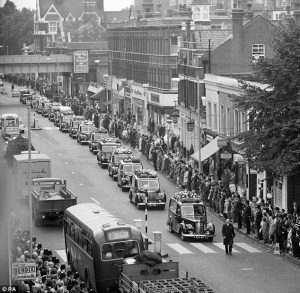 The murders caused outrage and there were calls for the reintroduction of the recently abolished death penalty. There were also demands for an increase in the number of police officers trained to use firearms – the Metropolitan Police Firearms Wing, now known as CO19, was established soon after the incident.

On 12 December 1966, after a trial lasting only six days, the three men were convicted of murder and possession of firearms and sentenced to life imprisonment.

John Duddy died in Parkhurst prison in 1981. Witney was released in 1991 but was beaten to death with a hammer by his flatmate, a heroin addict, in 1999 at his Bristol home. In October 2014, the Parole Board for England and Wales approved Roberts’ release and he was freed the next month. 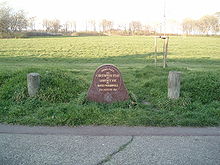 In 1988 the Police Memorial Trust established a stone memorial to the three officers at the site of the incident in Braybrook Street (pictured left). Here in Torquay we also have our own small memorial to the local choirboy who grew up to join the police and give his life on that summer afternoon.

From Pathe News here’s the report of the memorial – Roberts still hadn’t been captured when this was filmed: