If you drive along the Torbay Road from Torquay towards Paignton, through Livermead – from ‘laefer mead’, ‘the meadow of the wild iris’ – to your left is Institute Beach. At low tide can still be seen the remains of Torquay’s original medieval harbour. 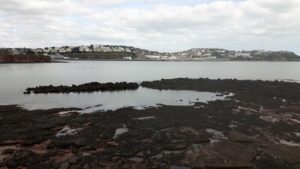 It is still occasionally described as a Roman harbour, but, as it wasn’t mentioned in that great ‘new owners’ catalogue ‘The Domesday Book’, we know it didn’t exist prior to the Norman Conquest. Such a valuable asset certainly would have been listed.

Doomsday records the acquisition of the foreshore of Livermead, but when the pier itself was actually built is unclear. It was likely constructed towards the end of the 11th or beginning of the 12th century. 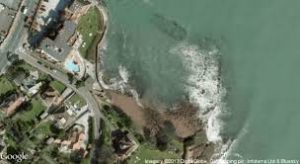 While there is no known evidence of the date of construction, and no record of any of the ships or traders that used it, it has been generally accepted that it was the work of one of the Lords of Cockington. The primary contender seems to be William de Falaise, feudal baron of Stogursey in Somerset – from the Exeter Domesday Book we know he held 17 Devon manors as a tenant-in-chief, including Cockington. The assumption is that William needed to maintain a passage to his possessions in Normandy, and wanted a landing place for the wine and other products of his homeland.

The harbour was formed by building out eastwards from each end of the headland. This was a bowed pier or breakwater which enclosed the basin with the entrance being between the seaward ends of the pier. Each pier consisted of two parallel walls about 6 feet apart- the intervening space was then filled with rubble.

The pier shows up in records from 1317 when permission was given to the Canons of Torre Abbey to fish with nets at Livermead. And here is another contender for the harbour’s construction, the Abbots of the Abbey, and there may be a possible clue in the name of Institute Beach. There have been a variety of suggestions for the naming of Institute Beach. One is that, when members receive the order of priesthood, it’s referred to as an institute. 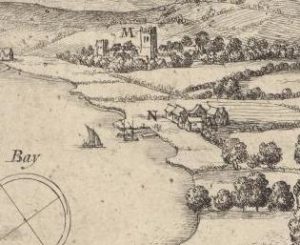 The harbour is mentioned several times over the centuries. The antiquarian and poet John Leland (1503- 1552) describes, “A small peere and socour for fischer boats at Livermead”.

Then we have an illustration of Torre Abbey drawn for Sir John Stowell of Bovey Tracey in 1661 when he had just acquired his new possession. Part of the map (pictured above) illustrates and refers to ‘Leuermead key’. In that illustration we can see the small fishing community of twelve cottages and nine fish stores or cellars that stood between the present Torbay Road and the sea. 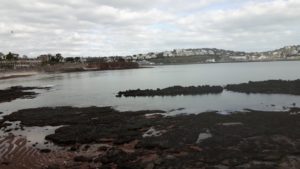 Despite the harbour’s slow collapse and replacement by the town’s current harbour, it was still in use during the second half of the 19th century. Oral history records that goods for Cockington Court would be unloaded at the foot of a pathway running down the eastern side of Livermead Head – today that pathway is on the western side of the Livermead Cliff Hotel. The goods were then carried up the cliff path across the meadow to Gooder’s Farm in Wheatridge Llane. Before reaching the farm a spring allowed the ships crews to replenish their water supplies, and from the farm came food for the next voyage.

In 1711 Rawlyn Mallock leased a place on the pier in “Torkey” suggesting that by then the Livermead harbour was unusable. A 19th century engraving shows the last two of those lost fishing cottages standing above the beach.

Thanks go to Keith Holman for the pictures.