Torre Abbey Historic House and Gardens has teamed up with Play Torbay, a local leading provider of free play activities, to bring the Torre-ible Histories quest to the Abbey.

Suitable for children over four years old, Torre-ible Histories was devised by young people and is a quest with artists based around the 800 years of history of the Abbey – all in a playful way.

It tells the thrilling story of Torre Abbey’s involvement in the dissolution of the monasteries, the Spanish Armada up to the present day with beastly battles, and stories of captured prisoners and amazing myths. Torre-ible Histories is packed with quizzes and challenges, sketches and songs bringing to life the thrilling and horrible histories of Torre Abbey. 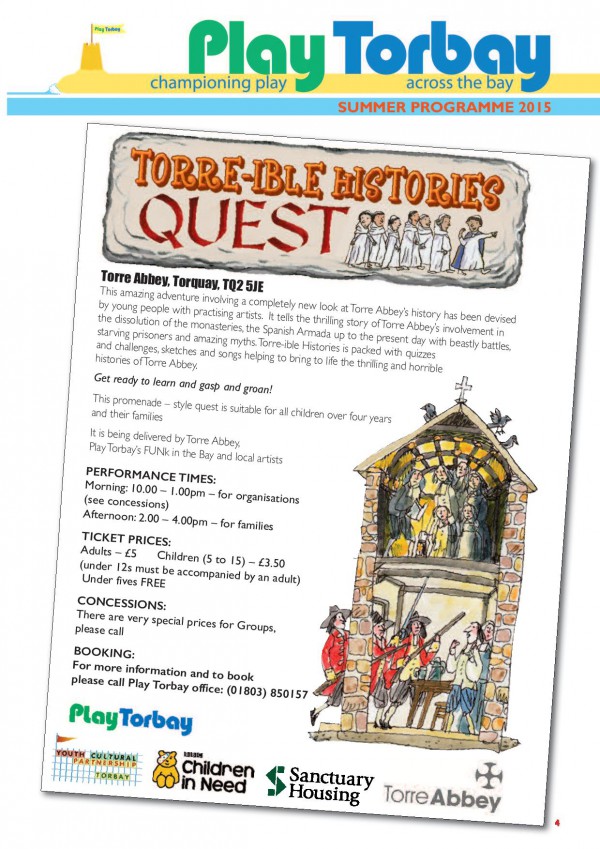 Cllr Nicole Amil, Executive Lead for Tourism, Culture and Harbours, said: “Torre Abbey Historic House and Gardens is the heritage jewel in Torbay’s crown and it is fantastic to have Play Torbay host this event here. The Abbey is steeped in history and tells many stories in an interesting and contemporary way, so it is wonderful to see children embracing this in a fun and educational way.”

Tanny Stobart, Play Torbay’s Director and project manager for Torre-ible Histories, said: “This is an amazing adventure for all participants, supported by the Youth Cultural Partnership, FUNk in the Bay and local artists, involving Torre Abbey’s history, songs and music, drama, arts and crafts, digital animation and lots of fun – simply unmissable!”

“Nothing has surprised me more in life than to have become famous authoress – I sometimes can’t believe it’s really me.” Agatha Christie Fans of the Queen of Crime are in for a treat this autumn as…

…you are sure of a big surprise! This summer, Torre Abbey has lots of exciting events happening including The BFG in Pictures, The Wind in the Willows outdoor theatre, blockbuster film screenings at t…

Television antique expert Adam Partridge is well known for his regular appearances on Flog It!, Bargain Hunt and Dickinson’s Real Deal, but on the 20th June he will be in Torquay with several of his s…