Update: Sadly the woman has passed away. More here: https://wearesouthdevon.com/murder-enquiry-launched-following-death-of-a-woman-in-paignton/

A woman has been taken to hospital following an incident in Paignton this afternoon.

The woman is reported to be in a critical condition following an incident on Winner Street at around 12.45pm. 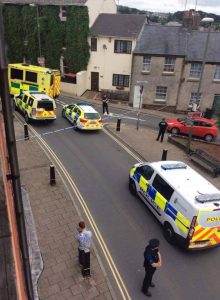 One man has been taken into police custody.