Emergency services were called to Scabbacombe earlier today after a woman fell on a cliff path and injured her ankle.

A spokesperson for Berry Head Coastguard said on Social media:
“An ambulance was on scene and the air ambulance also landed on the beach. The path was too slippery for a carry out so it was decided that rescue 106 to be called and the casualty was winched aboard and flown to Torbay hospital,” 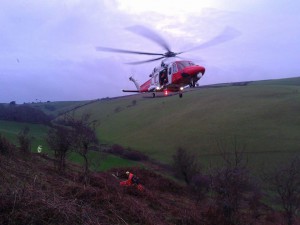 Torbay Coastguard helped prepare the landing site ready for the helicopter and posted this video: